On Tuesday, May 17, Arizona voters will head to the polls to approve or reject a measure state legislators have proposed to resolve a long-running lawsuit over school funding.

Proposition 123, the Arizona Education Finance Amendment, would pump $3.5 billion into Arizona’s public schools over the next 10 years by allocating money from the general fund and increasing annual distributions to schools from Arizona’s Permanent Land Endowment Trust Fund.

The fund is valued at about $5 billion. Currently, 2.5 percent of the value of the trust is distributed each year to beneficiaries, including K-12 public schools, which own the majority of the trust. A “yes” vote in the May 17 special election would increase the distribution amount to 6.9 percent for 10 years.

Proposition 123 is a legislatively referred constitutional amendment, meaning it was initiated by legislators, not citizens. The measure was proposed as a solution to a 2010 lawsuit on behalf of five school districts, the Arizona Education Association and the Arizona School Boards Association.

Supporters say the plan would not raise taxes and immediately would boost per-student spending—as early as June, if passed—avoiding further delays as the lawsuit plays out.

Opponents voice concerns about letting the state off the legal hook and too aggressively drawing down state trust funds that already belong to schools. That, they say, could affect future funding needs and require higher taxes to fill the gap.

Parents, teachers and community leaders in favor of the proposition detail their reasoning at yesprop123.com. Proposition 123 is backed by many high-profile government and education officials.

Gov. Doug Ducey praises the measure as an “innovative way of ensuring that our schools get additional sustainable funding now and into the future—without raising taxes.”

In a statement on the Arizona Department of Education website, State Superintendant of Public Instruction Diane Douglas points to the additional funding Proposition 123 would create as “an important first step to tackling the teacher shortage our state faces.”

Eileen B. Sigmund, president and CEO of the Arizona Charter Schools Association, says Proposition 123 “settles a past-due bill and provides much needed stability to K-12 education funding. [We] … see it as a bridge to school-finance reform focused on the students, not the systems.”

The measure has the support of Phoenix Mayor Greg Stanton, the Arizona Chamber of Commerce and Industry and Children’s Action Alliance, a nonprofit children’s advocacy organization.

Even so, it’s not a long-term fix for Arizona’s dismal ranking—third worst in the nation—for per-pupil education spending.

Passing Proposition 123 would be “one step toward a long-term, sustainable and dependable funding plan,” according to Expect More Arizona, a nonprofit, nonpartisan organization supporting world-class education for every student in Arizona. “We believe that other steps in the future should include increasing teacher pay, updating and addressing the renewal of Proposition 301, restoring funding to our universities and community colleges, ensuring all children can read proficiently by the end of third grade and restoring Career and Technical Education funding.”

Opponents of Proposition 123 have their own website at noprop123.com.

Under a list of seven reasons to vote “no,” the site contends that passing Proposition 123 “rewards lawmakers who violated the state Constitution” and fails to “allow our courts to hold lawmakers accountable” for funding lapses.

The site also notes concerns that passing Proposition 123 will lead voters into a false sense that school funding has been “taken care of,” which could lead to later votes against school-bond overrides or continuation of sales taxes directed to education.

In an article for the Arizona Capitol Times, Phoenix attorney Dianne Post predicted that passage of Proposition 123 would result in another lawsuit over its implementation, resulting in yet further delays to education funding. Pollack also voiced concerns about the proposition’s “many ‘triggers’ that allow the Legislature to reduce or even stop the distributions from the land trust.”

Chief among those who oppose the initiative is State Treasurer Jeff DeWit. In an opinion sent to Raising Arizona Kids, Jeff DeWit calls Proposition 123 a raid on the schools’ endowment trust fund. He argues that Arizonans will “most certainly” end up paying higher property taxes and may face other consequences by accelerating use of the trust-fund distributions.

The trust fund already will pay a record distribution of $105 million to endowment beneficiaries in fiscal year 2017, DeWit announced in January. The amount represents a 12.03 percent increase year-over-year and sets a record as the largest amount paid to schools in the trust fund’s 104-year history.

“This shows the wisdom of the current distribution formula and why schools can double the amount of money they receive from the trust fund every six to seven years permanently under the present formula if it remains untouched,” DeWit said. “By safeguarding the principal of the fund, even with market volatility, the current Constitutional distribution formula protects teachers and students now and in the future so these dollars that are sent directly to the classroom will not lose their purchasing power.”

With so much at stake, Arizonan voters should study the issue and make their own informed decisions about Proposition 123. Whether you’re for or against, make sure your voice is heard on May 17. 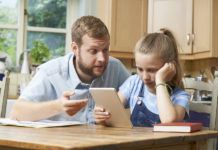 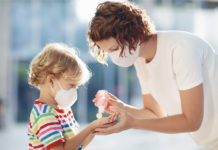 77 percent of Arizona parents are “not at all confident” about sending kids to school Aug. 17 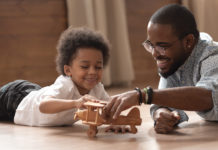 Prepping from home: How to get your child kindergarten ready