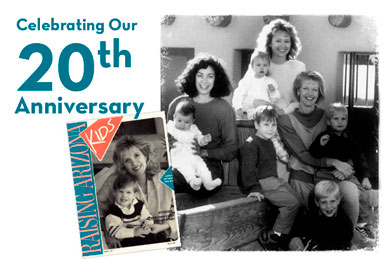 Our first cover mom was Debra Brewer, who had recently retired from a career in television journalism. She’s got her oldest son Charles on her lap (above) and gave birth to her second child (who turned out to be another son, Chase) six days after we did our interview.

Our first printer was a Sir Speedy quick-print shop at McDowell Road near Third Street (it is no longer there).

Our first issue was 16 pages. It had nine ads. The subscription price was $12.

Our first “What’s Up” calendar featured 30 items and occupied just two pages in the magazine.

Our first feature story, written by Teresa, was “Parents: Going through a Stage?” It explained how children “nudge us into growing and changing in ways we never expected.” It just as relevant today as it was then. 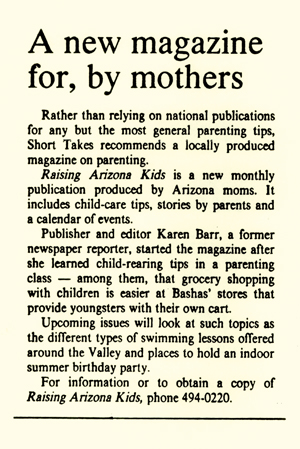 Our first office was Karen’s then-18-month-old son David’s nursery. She moved him to a trundle bed in his 3-year-old brother’s bedroom and the crib became a place to store research and office supplies.

Our first mailing address was a post office box at a Mailboxes, etc. location down the street from Karen’s house.

Our first press exposure was a five-paragraph story in the Arizona Republic announcing the magazine’s launch. More than 160 people called our office in Publisher & Editor Karen Barr’s house after reading this small announcement, which appeared in the “Short Takes” column on page E-3. It’s possible that many more called; the answering machine filled up while Karen was out meeting a client and it stopped accepting messages.