I think I’m in love. Yeah, it’s mom-love; but it’s still a thrill, and it’s all because I watched an old audition tape of a boy at a barre, all arms, legs and eyes, dancing with grace and discipline beyond his years. His performance was stunning, but it was those eyes, wide with hope and determination, willing his future into existence, that stole my heart.

The object of my affection is David Hallberg, true ballet royalty who grew up right here in Phoenix. He is a principal dancer with the American Ballet Theatre, guest artist-in-residence of the Australian Ballet, former premier dancer with the Bolshoi Ballet, and arguably the most important male dancer of his generation, having danced practically every major role in ballet’s canon in engagements worldwide.

Currently, he is on a book tour — and will be a Changing Hands in Phoenix at 7 p.m. Friday, Dec. 22 — as well as being back to ballet and in top form again, after recovering from a career-threatening injury.

Watching clips of him perform on YouTube makes all the acclaim understandable, even to a non-dancer. He is breathtaking: a poem of pure, precise energy; a symphony of movement and nuance disguised as a mere mortal.

Upon reading his recently released book, however, I learned that he is a very human young man of fascinating contradictions. He’s a midwestern-born, western-raised modern millennial with the classic face and figure of a Romantic poet or one of Tolkien’s doomed elven lords. But he’s not a tragic hero: he only plays one onstage. In fact, he is a strong, superbly conditioned world-class athlete and performer with the observant, reflective mind and lively intellect of a talented memoirist.

Seemingly laid-back and calm, Hallberg is an artist obsessed with his vocation. He is ferociously driven and ambitious to perfect his technique and enrich the expression of his artistry; but genuinely modest, desirous and accepting of the most exacting critical evaluation.

His book begins with a searing introduction written while in the depths of despair over his apparently unfixable injuries, and moves full circle through his remarkable life, starting and ending with marvelous descriptions of two very different sessions of “morning class,” the hub around which the wheel of every ballet dancer’s life turns.

Hallberg describes each spoke of his particular wheel in thoughtful, clear prose, beginning with his childhood in Minneapolis and Phoenix. He doesn’t shy away from talking about the years of bullying he endured from classmates for being different, and the solace he found in his absorption in dance and in the unwavering emotional support from his parents.

He gives an engrossing account of his growth and evolution as a dancer, detailing his work with some of the most famous coaches, choreographers and ballerinas in the world today and his relentless efforts to become an even better dancer.

The last third of the book chronicles how Hallberg heedlessly overtaxed his body, inviting his devastating injury, subsequent surgeries and two years of futile efforts at rehabilitation. He is unsparring in his self-criticism and shockingly honest in describing his complex, sometimes contradictory and self-defeating psychological and physical struggles while pursuing his ultimately successful treatment in Australia.

Even knowing the eventual outcome, the book’s last line left me breathless. Dance is Hallberg’s reality and his refuge. While we sleep to dream, he awakens and brings his dreams to life. Would he be able to do so again? That last line captures him performing an action that could instantly decide his fate. He is risking it all, right there, right then. Without a doubt, this man is son to the boy on the tape, the boy whose talent and fierce will had created the future he desired. Hallberg’s story is compelling and well-told.

If you go: David Hallberg will discuss his autobiography “A Body of Work” with Ballet Arizona director Ib Andersen at a ticketed event at the Phoenix Changing Hands Bookstore 7 p.m. Friday, Dec. 22.  The $28 book comes with two admission tickets.

RELATED: A conversation with David Hallberg

See a clip of David Hallberg on the Colbert Report here. 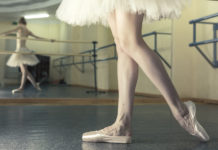 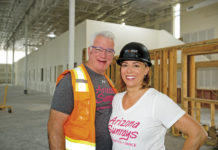 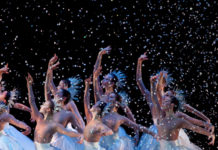 After a hiatus from live music, “The Nutcracker” brings back the symphony