I started out holding the whole experience at a distance. I looked, but didn’t see. I listened, but didn’t hear. And I struggled to breathe — the smell of 250 desperately poor people who live without running water or toilets was overpowering and disconcerting.

We all hear about “the starving people of Africa.” It registers vaguely on some level of human compassion, I suppose. The reality of it is something very different.

When we arrived at the entrance to the small church in the village of Wolayta, Ethiopia, the atmosphere on the street was almost festive. Curious children and adults approached our Toyota Land Rover as we quietly stepped out. Everyone knew something was up inside the red-gated compound of the church.

Brian deGuzman and our Ethiopian driver, Mecona, carried bags and boxes of clothing and shoes that our host, orphanage director Stephne Bowers, had collected. The items had fulfilled their usefulness at the orphanage and were considered too worn (probably by frequent hand washings on a concrete slab) to clothe the children in her care. For the people behind the gate, however, these third-hand items would be a welcome gift.

As we crossed the threshold and entered the courtyard of the church, I gasped. These “poorest of the poor,” as Stephne had described them to me, were huddled close together on the grass and dirt. The stench was claustrophobic; confined and amplified, it seemed, by the boundaries of the church walls and the courtyard fence.

I wanted to be respectful, not a gawking tourist. So my first instinct was to avoid eye contact with anyone in the crowd and focus instead on the dignitaries — the pastor of this church and several of his colleagues from among the 10 area churches that had gathered this needy crowd. I pulled out my video recorder so I could capture the conversations but initially kept it focused on the guys in charge.

The pastor was eager to show us his church. He took us into the dimly lit sanctuary and animatedly answered questions Keri deGuzman posed about services held there. Then we gathered in a small, dark office, where he proudly showed — and modeled — brand new purple and green choir robes.

I tried to listen but grew tired of the tour, which was clearly intended to entice Brian and Keri into offering some sort of support. At one point, they were asked point blank how the church could acquire a computer.

Finally it was time to commence the real purpose of the day. All the dignitaries and guests were ushered outside, to rows of red-painted wooden benches. Keri and Brian gestured to me. “Join us,” they waved. I demurred, gesturing back that I would photograph the event from the back of the courtyard.

I forced myself to wade through the mass of tightly clustered families, still refusing to make eye contact with any of the individuals. I pulled out the zoom lens for my camera, knowing as I did that it was a cop-out; it would allow me to get some good photos of faces without crossing any boundaries of interpersonal comfort.

I stood beside the bright green wall of the church building as the pastor held his Bible in the air and gave a short, inspirational message that left the crowd clapping and animated. I watched as Stephne Bowers shared an impromptu message of her own. She had told me earlier that she doesn’t prepare ahead for such speaking because, when she does, her words feel flat, forced and somehow less authentic. So while it is incredibly nerve-wracking to make public expressions of her faith unprepared, she has learned it is more effective to simply speak from her heart, and trust that God will give her the words.

A song began. Repetitive and rhythmic, it continued to build and grow in volume and energy. The young woman sitting on a bench beside me had an incredibly lovely, haunting voice. I tried not to be obvious but couldn’t help watching her; she was transfixed by the music, inhabiting a different place in her mind that was not consumed by hunger and pain.

One by one, I saw some of these weakened people rise to their feet, singing with their whole bodies. The spiritual energy of the clapping and swaying gave me goosebumps. In the midst of this terrible poverty and unimaginable hunger, there was comfort, and joy.

Tomorrow: More about food distribution day — and the children who encouraged me to open my eyes. 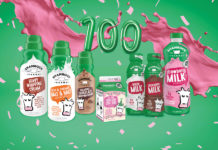 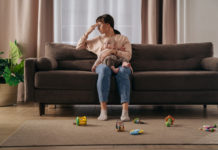 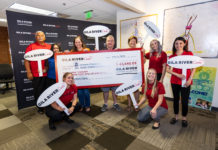