Junie B., possibly the world’s funniest kindergartner, is back, and the word is she’s not a crook.

Find out Sunday, Sept. 11, when Childsplay opens its 40th season with the world premiere of “Junie B. Jones Is Not a Crook,” based on two of Barbara Park’s bestselling books, “Junie B. Jones is Not a Crook” and “Junie B. Jones Loves Handsome Warren.” The series’ beloved characters have been brought to the stage previously by Childsplay, often breaking box office records for the theater.

“As with any of the Junie B. stories that Barbara Park has given us, we will get a fun romp through Junie’s world in this new adaptation,” says Debra K. Stevens, the show’s director. “I think families like her, because there is a Junie B. in every family who needs the love, support and guidance from the adults in her world.”

In this adventure, something terrible has happened to Junie B. Someone has taken her new black furry mittens and kept them. So when she finds a wonderful pen of many colors, shouldn’t she be allowed to keep it? After all, it’s “finders keepers, losers weepers,” isn’t it?

And then there’s that new boy in kindergarten who thinks June B. is a nutball. What is she to do about that?

“I think we can connect to her dilemmas,” Stevens says. “We feel her joy and frustration, her struggle to make good choices, her sense of friendship, and we see her heart on her sleeve. There is something about watching Junie B. negotiate her world that we recognize, and that endears her to us.”

Unlike some other venues with performances aimed at young audiences, Childsplay uses adult actors in children’s roles.

In “Junie B. Jones Is Not a Crook,” Kate Haas portrays Junie B. Haas joined Childsplay in 2007 as an actor and teaching artist and has appeared in such Childsplay productions as “The Velveteen Rabbit,” “Junie B. in Jingle Bells,” “Charlotte’s Web” and “Robin Hood.”

Some of her other local credits include “Love’s Labour’s Lost” for Southwest Shakespeare Company, “Julius Caesar” for Class 6 Theatre and “If You Give a Pig a Party” for Phoenix Theatre for Young Audiences.

Recommended for ages 5 and up, “Junie B. Jones is Not a Crook” was adapted for the stage by Allison Gregory.

By the end of the show, Junie B., with the help of her friends and a lot of laughter, has learned a thing or two about how to be herself and how to do the right thing. Good lessons for us all, no matter what our age. 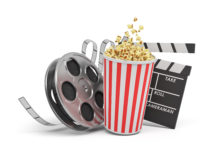 Curiouser & Curiouser is a new live-theater experience from TheaterWorks