Fourth in a series about foster care in Arizona

Chandler mom Michon Javelosa always knew she wanted to adopt. “I was not interested in having biological children,” she says. “I figured there were plenty of kids out there.”

Her husband, David Staricha, agreed. They decided to attend an orientation at Child Crisis Arizona. Their initial thoughts: “This is awesome!” And then: “We’re not ready.”

A little more than a year later, they went back. Thirteen weeks of classes took them from being extremely nervous to a feeling of “we can do this.”

The child-development courses were extremely helpful, Staricha says. His friends with biological children admit they wish they’d had something similar. While getting certified, the couple also volunteered at a Labor Day weekend camp in northern Arizona for families of foster care and adoption. It gave them the opportunity to witness firsthand how these families function.

“We learned these kids are just kids,” says Stiracha. “You worry, because there is a stigma about ‘baggage’ or ‘being broken,’ but you couldn’t tell who was adopted or biological or foster care. They were just kids.”

As the couple’s classes came to a close, Javelosa posted on Facebook that she and her husband would soon be eligible to adopt a child. She wanted to alert her family and friends, so they would be ready to welcome a new child into their sphere.

A Facebook friend who saw her post knew a child who would soon be eligible for adoption. The woman had been providing kinship care for this little boy. She said the family’s rights were being severed, and she would like to see him placed with a loving couple.

The final decision was in the hands of the adoption agency, but both parties requested the placement be considered.

The couple says they were “as prepared as you intellectually could be.” But, like all new parents, they were surprised by what a change it made in their lives.

Javelosa puts it this way: “It’s kind of like going to college. You think you’ve learned it all, and you’re prepared. But then you join the workforce and realize — Whoa! I didn’t know anything!”

It took a while to acclimate as they were all getting to know each other. The classes had taught them to recognize the first signs of attachment, such as when a child starts to look back at you for reassurance before trying something new.

Javelosa says she assumed that, as the mother, the child would bond with her first. But the little boy took to his new daddy nearly right away, and actually called him “Mommy” for a long time.

Introducing Arius to his extended family has been a very rewarding experience. Javelosa and Staricha are the only children in their families. This little boy is the first grandchild for both sets of grandparents.

It hasn’t always been easy for their son.

“I keep trying to put myself in his shoes,” says Javelosa. “I feel sorry for him.”

Arius shows some signs of insecurity, and is still wary of strangers — especially women. But he now has a wide circle of people who love and care for him.

And his parents are discovering the joys of having a child in their lives.

“We recently made a trip to Disneyland,” says Staricha. “I thought it was cool as a kid, but seeing it again through his eyes kind of blew my mind.”

If you want to meet the proverbial “supermom,” you wouldn’t have to look much further than Mimi Condon.
The day we met for our interview, her family had just returned from vacation. It was also her son’s 3rd birthday.

“You don’t mind if I bake a cake while we talk, do you?” she asked.

She proceeded to stir up a Batman cake while telling her life’s story and watching her four little ones play nearby.
She never skipped a beat.

She told me how she and her husband, Tom, were unable to have more children after their daughters Blaize, now 23, and Kelly, now 22, were born, so they started fostering children in their home through Catholic Charities.
She ended up fostering so many children that she’s lost exact count, but she estimated the number at “no more than 15.”

“The first sibling set was here almost two years. They left for eight months, and then they came back.” Condon described the experiencing as “heartbreaking,” because when they returned, they were “totally different children.”

The couple didn’t want their foster children to have to move from place to place, so they decided to adopt the children who were not able to return to their original families.

Their son David, now 10, was the first child to come into their home. Then came Tommy, who is 6. At that point, Condon left her job to focus on her family.

Next, she was asked to take in a 5-week-old baby, “just to foster.” The baby had been staying in offices at Arizona’s Department of Child Safety because there were no home placements available. Condon decided that as long as she was home with the other two, she could do it.

Everybody, especially her husband Tom, got really attached to the little boy whose name was Isaac — now 3. They adopted him, too.

“Like everybody says, we thought we were done,” Condon said, laughing as she popped her cake into the oven.

One day she received a letter from DCS director Greg McKay. He had written to foster families across the state in a desperate attempt to find homes for the children on backlog. He said how much foster families are appreciated. But the letter was also a plea: Can you do more?

“I read it and read it I don’t know how many times to myself. Then I told my husband: ‘I feel funny. I feel like I have to say yes.’”

In a short period of time, children were coming and going in and out of the door: a 2-day-old, an 8-month-old, a 1-week-old, another 2-day-old.

“And there he sits,” says Condon, pointing to a now-1-year-old curled up with a blanket on the couch. “I told my husband, ‘Whatever you want to do.’”

His answer: “We’ve got to.” So they started the process of adopting him as well.

Why did she keep taking children in?

“I know it’s best for children to be with their [original] families,” she says. “But it’s not always the safest.”

She’s learned from child therapists that even the youngest baby can feel like something’s missing, like there’s a hole. That’s kind of how she feels about her two miscarriages, “like there’s someone else (who’s) supposed to be here.”

Condon has tried her best to fill that void for the children who have come through her door. And when they have fostered children, they have tried to to assure families, “We are here to keep your child safe until you can do it.”

Unfortunately, there are some parents who just don’t know how to love and care for their children.

As we talked, the 3-year-old whose birthday it was walked proudly through the door — balloon in hand. It’s a Condon family tradition to pick out a balloon on your birthday. Birthday kids also get to wake up to a house fully decorated on the morning of their “big day.”

The Condons’ oldest daughter, Blaize, welcomed the beaming boy into the room.

Their daughter, Kelly, who is married, has a 1-year-old and also serves in the military. She has plans to adopt and hopes to open her own child crisis center one day.

Condon says fostering and adopting children was the greatest gift they could have given to their two biological daughters, who were 11 and 12 when they started taking in children. Both were very involved.

But parents who are interested in adoption have to go into it with an open mind, she says, because “there is a huge chance there are going to be additional needs down the road.”

Still, she feels fortunate to have these children in her life.

The VanderPloegs finalized the adoptions of their two children on Nov. 21, 2015 — National Adoption Day. They had a picnic to celebrate with family and friends. The children’s foster family came to celebrate, too.

The VanderPloegs had always talked about adoption; after a miscarriage in 2010, they decided that’s what they would do. Instead of fostering children, they went directly to the “red file” of children marked “adoption-only.” It’s a difficult route.

Trudi VanderPloeg says they felt horrible, even though “we knew we were making the best decision for our family.”

So they took a break.

“They give you 24 hours to make a decision,” she says. “We got 10 minutes down the highway, and called our case manager to say yes. Everything came together, and we just knew. I can’t even describe it. We just knew.”

It’s been almost two years now. She jokes about it, but truly believes “the kids adapted faster than we did.”

She gives a lot of the credit to the foster family that prepared them for the transition. It also helps that the children keep in contact with their siblings. “Bela remembers more and has separation issues” [when she has to say goodbye to her siblings],” VanderPloeg says.

But Bela also shows leadership qualities — probably because she has learned how to get what she wants for survival, says VanderPloeg, who strives to make sure Bela knows her basic needs will always be met.

Their son Manuel is more of a people pleaser, so she’s trying to teach him that there are times when it’s OK to say “no.” Both children are in therapy so they have “tools in their toolbox to deal with issues when they arise.”

Holidays are still hard for the kids, and the first Christmas was “a total disaster,” VanderPloeg remembers. The children had never received things that they could keep forever. On their birthdays, they weren’t used to being the center of attention.

The family has learned to celebrate differently. Instead of gifts, they give the children experiences, like visits to her husband Jim’s hometown in Michigan, where they go blueberry picking.

They also have established their own family rituals. Friday is “pizza and a movie night.” On Saturdays during football season, they watch University of Michigan football games together.

It has been a source of joy to watch the kids be accepted and embraced by their extended family. “I love it that my kids have cousins and aunts and uncles that they adore,” says VanderPloeg. “They’re forming bonds with the people who are important to me.”

She finds it especially heartwarming to watch them FaceTime with their grandparents, who sit on the phone and read them stories.

But what really affected her was the first time she received a card that said, “I love you, Mom!”

“It took my breath away,” she says. 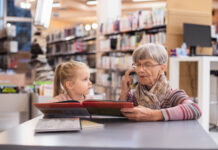 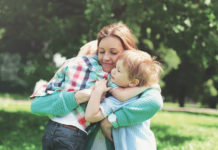