Wearing a sleeveless navy-blue dress and white low-top Converse shoes, Aleena Valdez stood behind the microphone and adjusted her glasses.

“You’re never too young to change the world,” she told the more than 60 tween and teenage girls listening to her soft, measured voice. “That’s what my dad always told me, and it’s always really stuck with me through my journey. So don’t let anyone change who you are, because you’re here for a reason.”

A Phoenix entrepreneur and philanthropist, Aleena was realizing yet another dream at that lectern as she hosted her inaugural Girls for Progress empowerment conference last summer at the Maricopa County Security Building in downtown Phoenix. She was 12 at the time. Now 13, Valdez is planning a June Girls for Progress conference in Austin, Texas.

This Phoenix teen can seem shy at first, but she is mighty.

At age 11, Aleena started her own lemonade stand near 95th Avenue and McDowell Road in west Phoenix, but it wasn’t just a one-day venture. She started getting real customers, and soon increased her offerings to include sno-cones and snacks.

“I realized that if I kept doing this, I could have my own real business,” she says.

It wasn’t a huge surprise to her parents. Aleena had put together a business plan complete with  a PowerPoint presentation when she asked them to loan her the money to get the lemonade stand off the ground.

She enlisted her little brother, whom she calls “Baby Rich,” as cashier and “flagger-downer,” having him dance and wave at passersby to attract customers. As business picked up, Aleena began creating new lemonade flavors, including strawberry, watermelon and cucumber. She even started taking custom orders online.

She quickly realized she could do more for the community. She rebranded her stand Aleena’s LemonAid, and — with the help of her school — donated more than $1,000 to Phoenix Children’s Hospital during Childhood Cancer Awareness Month.

“I had always wanted to somehow help kids around my age who had cancer,” says Aleena, explaining she was inspired by her mother’s work as a registered nurse on the cancer floor of a local hospital. “I realized that with the business, I could tie it all in.”

Richard Valdez says his daughter has always been quietly ambitious.

“Aleena has always been really driven in school and sports or whatever she sets her mind to. That’s something that did set her apart a little bit at a young age — that once she picks something up, she commits wholeheartedly,” he says. “Once the business started to evolve into something larger, it was like, ‘OK, if we’re going to do this, how are we going to get to the next step?’ And luckily, we’ve had friends and family who have helped to support Aleena and what she’s trying to do.”

As Richard tapped friends to build websites and Aleena’s brothers to assist with taste-testing and lemon-squeezing, Aleena set about learning how to grow her business. Growing up in the digital age, she knew social media would be the key to reaching as many people as possible. She soon came across a book called “Renegades Write the Rules,” about social-media connection strategies written by speaker, podcast host and entrepreneur Amy Jo Martin, who began her career working for the NBA’s Phoenix Suns.

Aleena began communicating with Martin, who has more than a million followers on Twitter, and the two quickly hit it off.

“I became a bit of a mentor to her,” Martin says. “We would talk as she was navigating through growing her business and being an entrepreneur, and I’d guide her here and there.”

Aleena got her next big idea in 2015 during the huge Inbound business conference in Massachusetts, where Martin was a keynote speaker.

“In Boston, I spoke about the topic of gender equality and young girls and confidence,” Martin says. “And Aleena’s parents were kind enough to allow her to come and watch this talk, because she was actually included in it.”

Listening to Martin’s address provided Aleena with just the right spark needed to start her own conference to promote empowerment, confidence and civic engagement in girls her age.

“I saw Amy Jo as well as many other women speaking about girl empowerment,” Aleena says.  “And I wanted to inspire other girls here in Phoenix to make a change in their community.”

Aleena hopes to create a supportive framework through peer support for other girls thinking about striking out on their own and challenging notions of what girls “should” be.

They danced to Taylor Swift’s girl-power anthem “Shake It Off,” wrote down and shared aloud their dreams and hopes and gingerly crumpled up slips of paper scrawled with negative things people had said about them in the past.

And when one girl whose dream it was to be a singer couldn’t work up the courage to get through an entire verse of “Mary Had a Little Lamb,” an entire room of smart, confident and encouraging young ladies spontaneously joined in — a thunderous chorus of female empowerment and solidarity.

“The conference went really well,” Aleena says. “I was surprised with how many people showed up, because it was my very first conference. But a lot of people did end up showing up, and other than a few bumps, we reached our goals.”

Now, Aleena is busy planning this summer’s conference and being a brand ambassador for local T-shirt company InspireHer. In addition, she just finished playing both wide receiver and safety on a league football team as one of only two female players.

“I’ve been researching ways to expand Girls for Progress to more cities next year,” she says. “So I’ve been talking with some people in Austin, and I’m thinking about having the second conference there. We’ll have new goals with some of the same speakers and some new ones, too.

“I’ve also gotten involved with 1 Mission, which is an organization that builds houses for people who live in (poverty), but in order to earn their house, the family has to do some kind of service like planting a community garden.”

Aleena dedicated her 13th birthday to the cause by urging people to give to 1 Mission — a charity started by a Scottsdale firefighter — instead of buying her presents. She raised $115 for needy families.

Only Aleena knows what the future holds for her. For now, she plans to pass along lessons of perseverance and self-worth to girls also striving to make their unique mark on the world.

“I think it’s important to help other girls follow their dreams because some girls don’t feel like they themselves are good enough,” Aleena says. “If we empower them and (empower) each other, then they will realize they can do anything.” 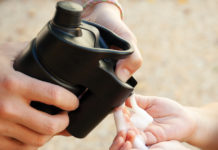