We’ve all been there: After grinding through another long work week and tackling an even longer list of household chores, you get invited to happy hour with co-workers and friends.

You almost jump at the chance to have a night out. But first, you need to find and pay for a babysitter. Then, guilt settles in about not serving your kids a home-cooked meal, not to mention regret about missing what’s often the only quality time you have with them.

Enter Amber and Kai-Saun Anderson of Mesa and their company, the New More.

Before becoming pregnant with her son in early 2013, Amber, 34, was working with Fortune 500 companies through the business-consulting firm she created in January 2012.

When she and Kai-Saun, 37, found out that they were expecting, they had their family plans all worked out. Kai, a photographer who had worked part-time at UPS for 14 years, could be home most of the day with their son.

Then life happened. Amber went into labor more than two months before her due date.

“I was 31 weeks when my water broke while I was at work,” she recalls. “I was rushed to the hospital and ended up delivering Kayson the next day. He was 3 pounds, 11 ounces when he was born, and from that moment, it was just kind of a very big wake-up call for me about what my priorities were, and that we really wanted to be there and be present for him.”

After a few months, Amber says, Kayson finally had grown to the size of a small newborn — about 6 pounds. Despite mounting financial pressure, Kai was able to take a few more months off to stay home with their son. Knowing she would need to find more work-life balance, Amber began to restructure her company.

“I made a decision that we couldn’t take him to daycare, because he was just too young, and because I really wanted and needed to breastfeed,” she says.

Amber turned her business into a more flexible small-business consulting firm that she named Kayson in her son’s honor, but she still struggled to juggle business meetings, daytime feedings and time with her husband.

“We’ve done really well there, but then I started to realize that it was hard to grow this business because everything required me to be away, whether it be happy hours or other sort of networking events, and I would have to leave my family, which I didn’t want to do,” Amber says.

This gave the new parents the idea for the New More. They wanted to give working parents,  both married and single, a chance to spend more time with their children while also providing networking opportunities. They resolved to create more family-friendly business and networking events designed to include kids and spouses.

Their signature event is “Milk. Beer. Wine.” — a happy hour hosted at Halle Heart Children’s Museum in Tempe. While you grab a drink and network, your kids get to run, jump and play in supervised child care.

“While the kids get to play, they can see you, you can see them and it’s completely integrated,” Amber says. “Part the appeal is that your kid is able to come right over, and you feel a little bit more comfortable.”

The New More also organizes business workshops, and Amber recently launched a weekly iTunes podcast on common “parentprenuer” problems. The company’s blog similarly features tips and advice from business owners and parents all over the country.

“The concept behind More Moments is that people usually only get photos around November for holidays,” Amber says. “Kids change so drastically and so often that you end up spending $600 for photos that become irrelevant just a few months later.”

Then there’s the More Retreat, an annual June family-friendly staycation the Andersons host at the Ritz-Carlton Hotel north of Tucson.

“I actually had the opportunity to both attend and also present,” Conner says. “But what was really cool was that my son and my husband were able to join me for dinner. … Then there were a few couples sessions that he could join me at while my son was with the nanny in the daycare room.

“As it happened, most of the kids who were there were toddler boys, so they all got to run around and play and bounce balls and he had a better time, obviously, than being cooped up in a hotel room. After we picked him up from the daycare, he got to watch a movie with the other kids while we grabbed a drink and had grown-up time.”

“You don’t even have to have kids to come, you can go and still get all the same aspects of networking. But you better not hate kids, otherwise you’re not welcome,” she says with a laugh. “At the end of the day, the goal is to have conversations with other really smart people in an environment that’s not restricted.” 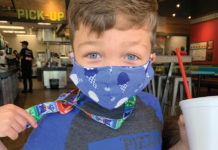