Young dads typically have a lot on their plates, and that’s especially true for Olympic gymnast Alex Naddour of Queen Creek. In addition to raising his 1-year-old daughter (alongside his wife, Hollie), he’s a real-estate agent and is training for the U.S. Men’s National Team tryouts in August.

Every other day you can find 26-year-old Naddour training in his father’s gym: USA Youth Fitness Center in Gilbert. He is not alone. Dozens of little kids are also there, running, jumping, tumbling and taking advantage of the facility’s open gym time. Naddour is right at home amid the chaos. In fact, he says it’s one of the keys to his Olympic success.

“When I was at the games and the crowd was screaming and yelling and there were gymnastics going on all around, I was able to focus on my program,” he says. “So even though these kids and their parents don’t know it, they helped my training.”

Naddour, who was born in Gilbert, went to Val Vista Lakes Elementary School, Highland Junior High and Highland High School before heading to the University of Oklahoma.

In February 2016, he and his wife, Hollie Vise, a fellow gymnast and World Champion, had a baby girl they named Lilah.

Less than six months later, Naddour was off to the Summer Olympics in Rio de Janeiro. He won a bronze medal in the pommel horse competition. Although Naddour says his baby girl was his inspiration, Lilah and Hollie didn’t accompany him to Brazil.

“Part of it was (concern about) the Zika virus, but that wasn’t all,” Naddour explains. “I wanted them to stay home so I knew that they were safe. My mom was there to help out. After it was over, I was like, ‘Oh man, I wish that they’d been here to see that.’ But during (the competition) it was, ‘I’m so glad that they are home and I don’t have to worry about them during the games.’ ”

There’s no question if Naddour makes the Olympic Team in 2020, his wife and daughter will be with him in Tokyo. But before that can happen for this Arizona athlete, there are years of competitions to win and teams to make.

Only six men will be chosen for the 2020 U.S. Men’s Gymnastics Team. Naddour is still deciding if he’ll compete for an overall spot or for one of the two spots set aside for individual events — his strengths: the pommel and the rings. As he sees it, he’s got an advantage. Training in his dad’s gym with his father as his coach is his not-so-secret weapon.

Naddour smiles when he talks about his dad, Mike Naddour, as his instructor — whom he adds was good at separating fatherhood from coaching.

“My advice would be, if you are a parent and you coach your child, try to separate (those roles). That helped me a ton. I never thought, ‘Oh, I don’t want to have my dad be my coach. I’m thankful he’s my coach.”

Today, Naddour sees another advantage to his coaching.

“It’s just me and my dad,” he explains. “Some other gymnasts have to wait to take turns, but as soon as I’m ready, I go. I probably take two or three more turns than most athletes.”

For Naddour, gymnastics has always been a family sport. His father and mother were gymnasts, and Alex trained with his brother. His stepbrother and stepsister were gymnasts as well before moving to cheer — a sport his stepmother teaches. Vise was an elite gymnast and a two-time World Champion who has since retired from the sport. Now, she’s his biggest fan.

Naddour says when he trained for the Olympics after Lilah was born, Vise would take her to the far side of the house so he could get the sleep he needed to be ready for the games.

Naddour began his gymnastics career at age 3, in the same gym where he trains today. He says he thinks his daughter will naturally gravitate to what he calls the family sport.

“I’ve always enjoyed training at our gym, just because there are so many families. Kids are out there having fun. They enjoy it, and they learn the basics of every single (gymnastics-related) sport out there, and mentally it’s good for them, and it’s just a great family atmosphere for sure,” he says.

Naddour competes in mid-August to retain his spot on the National Team, and no doubt he’ll have lots of people in Gilbert, Queen Creek and around Arizona cheering for his success. 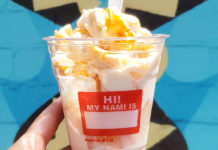 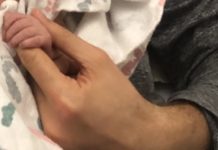 When a son becomes a father, during a pandemic 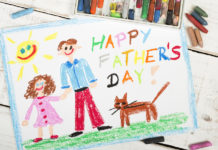