American Girl’s 2020 Girl of the Year doll is Joss Kendrick — a surfer and competitive cheerleader who was born with hearing loss. According to the store, the 18-inch doll, who comes with her own storybooks, helps show girls the importance of trying new things, pushing past stereotypes and being a team player. 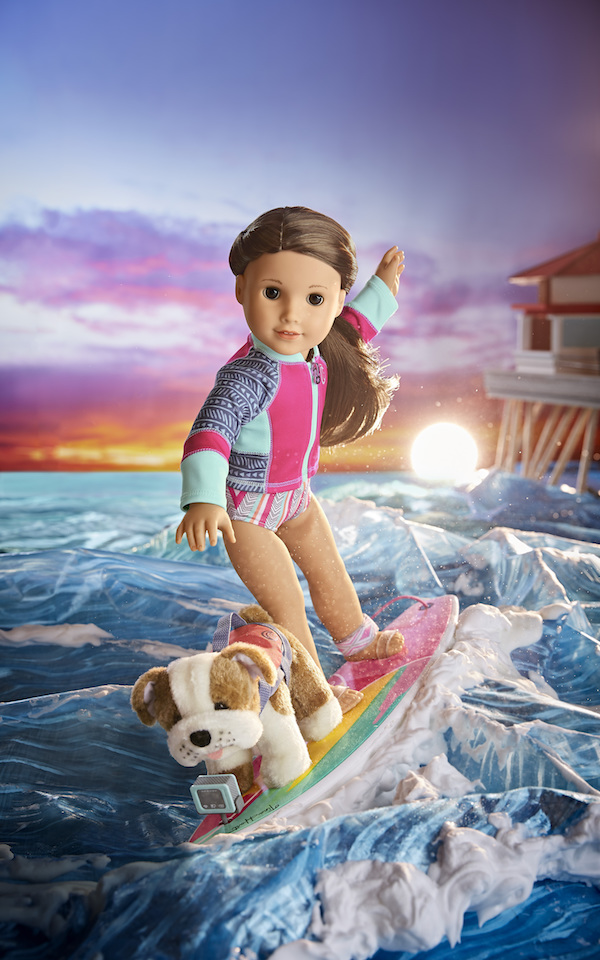 “American Girl has a rich legacy of creating timeless characters who encourage girls to reach for new heights and discover who they’re meant to be,” Jamie Cygielman, general manager of American Girl, said in a statement.

To debut Jess on Jan. 1, Mattel-owned American Girl teamed up with 17-year-old surfing prodigy Caroline Marks, who is preparing to make history as a member of the first-ever U.S. Women’s Olympic surfing team this summer in Tokyo, Japan.

In the two-book Joss Kendrick series, Joss grows up in Huntington Beach, California, as a fierce surfer. She accepts her brother’s dare to try out for the competitive cheer team, and is surprised to learn what a challenging athletic pursuit it will be.

The 18-inch doll, which sells for $98, has long brown hair and brown eyes and comes dressed in a swimsuit, hoodie and shorts with a removable hearing aid in her right ear.

Other Joss products include a surfboard and swim gear, cheer outfits and equipment and Joss’s English bulldog, Murph the Surf Dog. This spring, American Girl will sell Joss’s Volkswagen Surf Bus with more than 50 components, including a storage bench that folds into a bed, a pop-up stove and a fold-out table.

Throughout 2020, American Girl will collect donations for Hearing Loss Association of America at americangirl.com and at American Girl stores nationwide, including the local store at Scottsdale Quarter. The nonprofit HLAA promotes new technology, medical research and legislation to alleviate the effects of hearing loss.

Facebook
Twitter
Pinterest
WhatsApp
Previous articleMy toddler is doing all the things I used to judge other parents for
Next articleDana Wolfe Naimark: Reflections on 27 years of child advocacy

This meal was provided for RAK in exchange for an honest review of this dining experience. All thoughts and recollections are our own. May 25th...
Read more
Articles

Arizona Helping Hands (AHH) has been helping the most vulnerable and at-risk children in our state for more than 23 years. They are the...
Read more
Articles

Kobys From Here to Where: Goodyear Family explores over 35 states in travel trailer

The Koby family from Goodyear has taken on a whole new approach for what it means to go on family vacations. In early 2019, Monica...
Read more