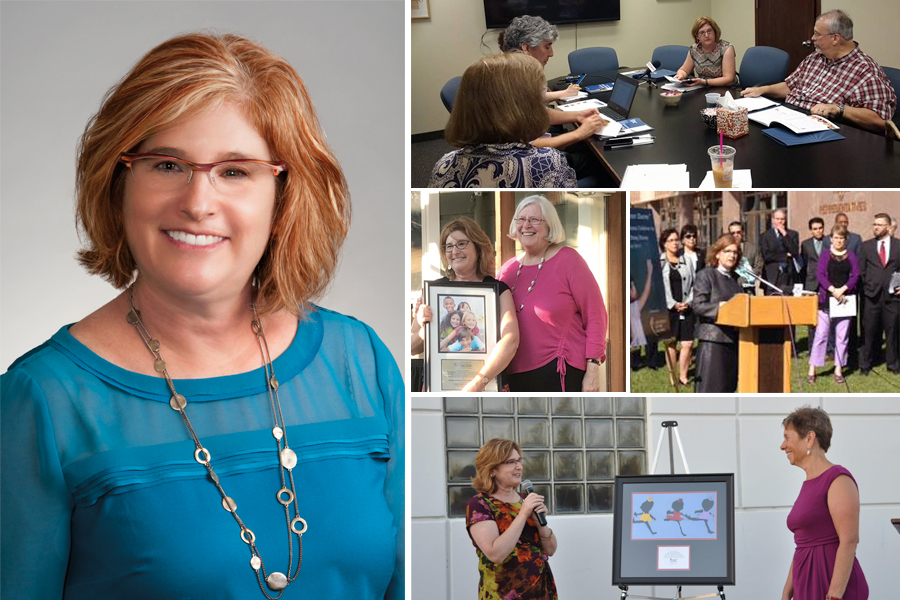 In September, Dana Wolfe Naimark stepped down as CEO of Children’s Action Alliance, a Phoenix-based nonprofit, non-partisan organization that advocates on behalf of policies that support the health, education and security of Arizona children.

A send-off party for Naimark, held at the Children’s Museum of Phoenix, was packed with staff, supporters, friends, family (including her two grown sons) and more than a few admiring fans from state and local government — among them Phoenix Mayor Kate Gallego, Arizona Secretary of State Katie Hobbs, former Tempe Councilman Corey Woods and former state legislator-turned-lobbyist Chris Herstam.

The event could only be described as a love fest. It was packed with heartfelt speeches, emotion-laced voices, lots of hugs, a video retrospective of Naimark’s life and career and even a quirky, almost-life-size photo cutout that captured Naimark — who is widely known for her fierce intellect, dogged determination and sharply honed analytical skills — during a much more whimsical moment.

The celebration marked the end of Naimark’s long tenure at Children’s Action Alliance, but no one thought of it as a retirement party. The buzz in the room centered on speculation about what Naimark will do next.

During an interview a few days earlier, Naimark seemed remarkably serene, at peace with her carefully planned life transition and looking forward to changing directions. She praised the organization’s choice of Siman Qaasim to succeed her.

Naimark served Children’s Action Alliance for 27 years, the last 13 as president and CEO. She has described those years as full of “diverse challenges, heart-wrenching realities, and happy steps forward.” She is confident and enthusiastic about CAA’s future under Qaasim’s leadership.

But Naimark is not done with advocacy. She fervently believes programs that strengthen children and families offer the single most impactful way to effect long-term, positive change in our state. She will unquestionably find herself a new platform from which to channel that passion. First, she says, she will take time to enjoy a few extra Zumba classes or pursue a new interest like taiko drumming.

What childhood issues were most pressing when you joined Children’s Action Alliance in the early 1990s? The focus in the beginning was childcare/early childhood education and childhood abuse and neglect. What I worked on very early on [was a response to] proposals for massive budget cuts in human services. Ha! Sound familiar? That’s the first thing I remember doing — coming up with strategies to fight those budget cuts.

How about now? Obviously our world has changed enormously. Families have changed, our communities have changed, workplaces have changed. But what kids need is still the same. Really, the issues are the same. It’s not that we haven’t changed anything [along the way]. We have to remind ourselves of that. You change things that are affecting kids’ lives for a period of time. Then it might get broken, or get weakened, or get undone, and you have to go back and do it again. Or circumstances change and you might need a different thing. I think today there is much more interest, though not yet action, and a growing understanding of the issues of racism, systemic racism, income inequality and how those issues underlie many of the gaps for kids. I think that is a growing learning and an emerging change for child advocates and community leaders. It hasn’t yet been translated to action, but I think it will be.

Did you ever feel like you were taking three steps forward and two steps back? You’re always dealing with the winds of change, and new groups of legislators. To be in advocacy you have to know it’s a long-term venture. There’s always the next thing to do or try and the work is never done. It just isn’t.

Was there anything about your childhood and the way you were raised that influenced your career path and your passion for advocacy? I’m very, very lucky. I had a great childhood: two loving parents, great opportunities, great schools, great after-school activities. We were financially stable. My parents instilled in us that we were lucky to have everything we needed and we didn’t need more. The world is better off if everyone has what they need. It’s not about more, more, more. That was instilled in us as kids — not like a sit-down lesson at the dinner table, but just in the way my parents approached the world, and their generosity to other people and to causes. My mom does a huge amount of volunteer work, so definitely observing that [had an impact]. But beyond that, it’s how they treat other people, what they’re interested in, what they talk about, the fact that they read the newspaper every day. I saw that and saw the connection to the bigger world.

When did you realize your calling to mission-based work? My first job in Arizona was as budget analyst for the Joint Legislative Budget Committee, where I learned so much that I still use every day. You’re serving all the legislators, you’re analyzing the numbers and offering options, but you’re not taking a position and fighting for “this is the way it should be,” because that’s not your role. I realized I needed to be in a place where I’m putting my stamp on things and trying to shape things the way I think makes the world better.

There are so many important issues. How do you decide, when you have a small team, how to focus that energy and talent? The first year I was there I remember feeling overwhelmed, not by the tasks of the job, but by the enormity of the issues and the struggles children and families are facing — just feeling that it’s so huge and so hard. And obviously that is still true!

It’s not always what’s most important, it’s a combination of what’s important and where you can make an impact. You have to think about taking one step at a time. You can’t solve it all. You can’t transform it overnight. I remember that emotional feeling of almost being weighed down by the enormity of it and then growing into figuring out, “OK, you think about what you can do, where you can make a difference, and you focus on that.” There were times over the years, of course, when that [overwhelmed] feeling would come back.

What are some of your proudest accomplishments? KidsCare is huge. [Also called Arizona’s Children’s Health Insurance Program, or CHIP, the program provides high quality, affordable and cost-effective health care to low income children from working families.] We invested a huge amount of energy in partnerships, collaborations, outreach and awareness — starting years before KidsCare was created — laying the foundation, then working with [former Arizona Gov.] Jane Hull when she spearheaded creating KidsCare. We worked to keep it strong, making positive changes and doing outreach over the years, then we worked to bring it back when it got frozen [due to budget cuts]. Right now 35,000 kids have affordable health coverage. That is huge. And it obviously has lifelong impact on kids if they can have access to health care.

Other victories? Well, this is more intangible, but it is just as important or more important: activating more and more advocates for kids. That has come in many forms. There are many more people signed up on the legislative alert system to weigh in on bills, more people coming to the Capitol, more people involved in the issues. That is what will bring change families need. That, to me, is a huge part of our job — making it easier [for people to engage in the process of government], because of course it’s purposely designed to be complicated. Finding ways to make it easier, to provide people with tools, to get them excited and interested — that is a very big deal.

We’ve made tons of changes in the child welfare system over the years. Some are very tiny, but they have a big impact.

What are your hopes for the future of CAA? We need more time and resources and systems to help families before there is child abuse or neglect, before there’s a crisis. That has to be on the to-do list going forward. I think Siman will focus a lot on broader community engagement, and that will be very exciting. I have excitement, huge confidence and I’m just ready to be a cheerleader and see what directions they go in.

What would be your advice to today’s young parents who care about the future of Arizona kids? People can always make their priorities heard. So join either our action network (at azchildren.org) or the action network for any other group they believe in and care about. Sign up to get action alerts. On our system, you can literally press a button on your computer to send a letter to your own state legislators stating what you want for children and families.

One other thing that’s obvious but worth repeating: Vote in every single election. And vote the whole ballot, because all those [down-ballot positions] affect kids and families.

Facebook
Twitter
Pinterest
WhatsApp
Previous articleAmerican Girl’s newest doll is Joss Kendrick — a fearless surfer born with hearing loss
Next articleResolve to be involved in 2020: How to run for your local school board

If good food, wine, and live music sound like the perfect combination for a romantic date night, then Garage East Winery in Gilbert will be your new favorite spot.
Read more
Articles

Get your toddler into the pumpkin season with this easy apple craft! Supplies: Paper or canvas Apple. sliced in half Orange paint Paintbrush Googly eyes ...
Read more