Home Articles 4 ways to be an environmental superhero
ArticlesEnvironment 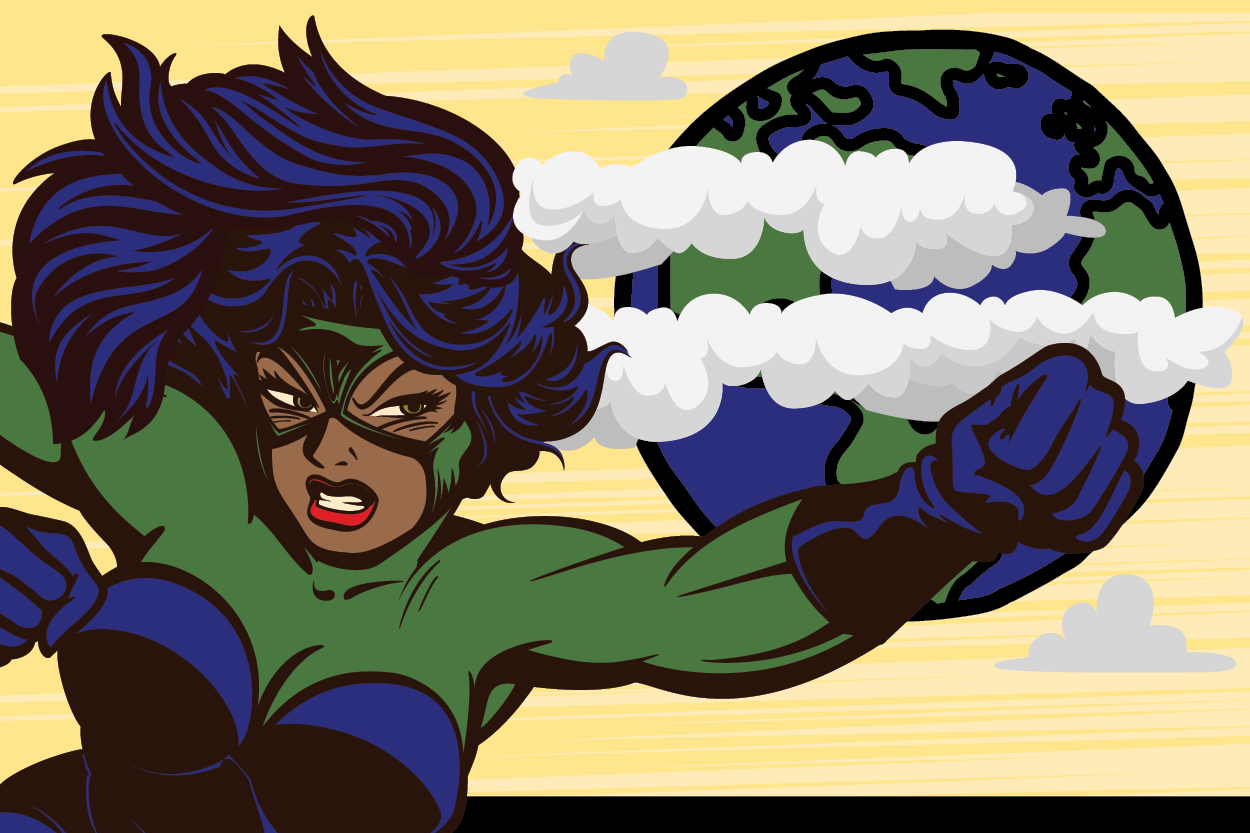 I hadn’t seen Elise Gornish in over a year. We had last gotten together pre-pandemic to watch our daughters climb around on the playground. But Dr. Gornish is a professor of ecology at the University of Arizona, as well as a parent. And I wanted information about the threat of climate change in Arizona. I sent her an email.

Her response was stark. She wrote about loss: “Our kids might not remember what a saguaro looks like, might not have memories of playing in summer monsoons, might not be able to eat cactus fruit. Climate change will change the culture of the state.”

Can we parents, busy with issues of our own, affect this outcome?

Climate change will likely increase drought in Arizona, and bring new extremes of excessive heat. It can trigger soil degradation, which can lead to flash flooding, which would leave homes and natural areas destroyed. Expect drinking water shortages and more dust storms, she wrote. “Climate change will make life harder and more dangerous worldwide, but folks who live in arid habitats will be most affected.”

Confronting climate change means we have to do more than change a few light bulbs. As parents, our children’s future is at stake, and it’s clear that current regulations aren’t cutting it, either. But what, exactly, can we do? 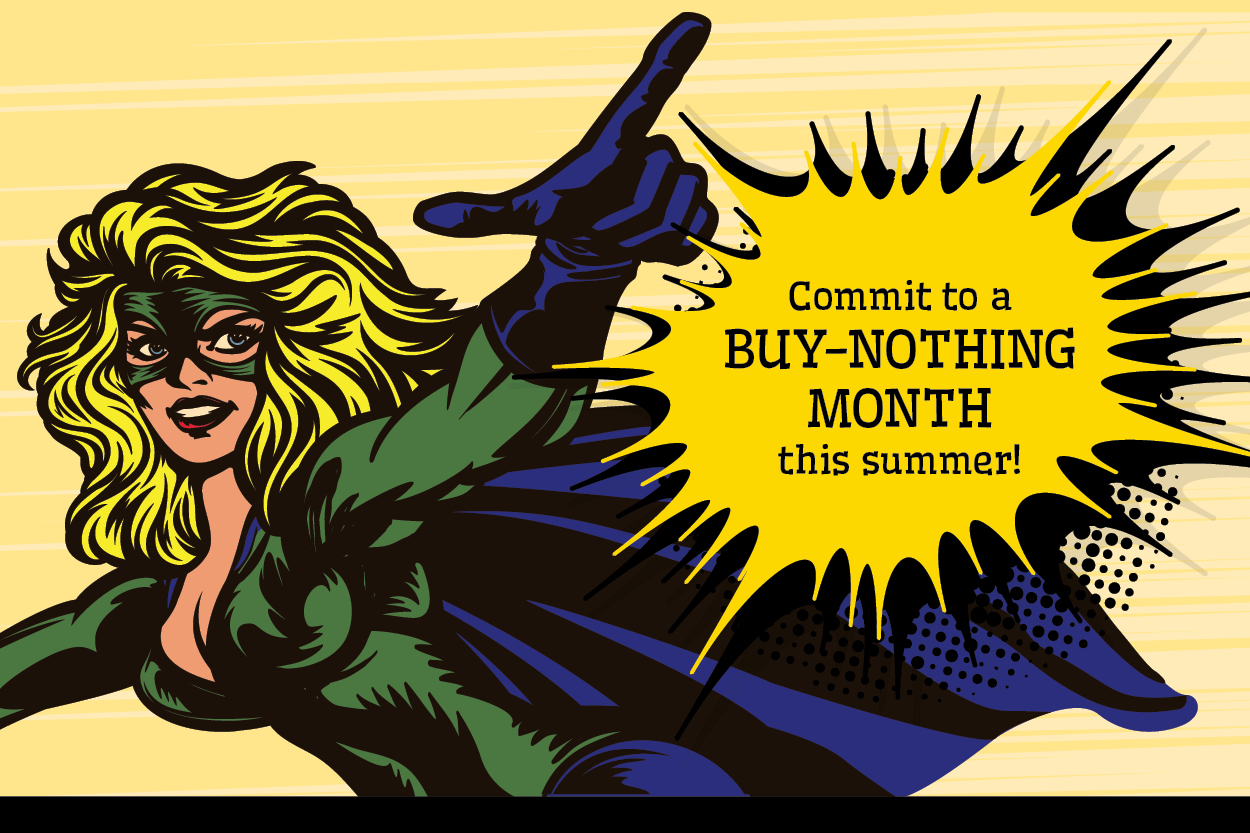 Consciously consuming includes actions you personally decide to carry out based on your consumption patterns. This could be anything from flying less or eating less meat to buying used clothes and toys for your kids.

In her email, Gornish pointed out a wide variety of actions consumers can take, from installing solar panels to purchasing locally grown food to divesting from fossil fuels to using low-impact transportation.

Sky Jacobs, a Tucson-area dad and long-time environmental activist working with the nonprofit Watershed Management Group in Tucson, also emphasized the importance of using as few resources as possible. “It’s complicated, figuring out what’s best,” he said during an interview. If you don’t know what else to do, he says, “consume less, live simply.”

If you want more guidance about how to have the biggest impact though consumer action, an article in “Environmental Research Letters,” an environmental science journal, suggests that avoiding air travel, going car-free and eliminating meat from your diet are top priorities. There are problems with the consumer approach, however. The major one is that it just isn’t enough. Air travel, for instance, produced just 3 percent of total carbon emissions in the United States in 2018.

On top of this, consumer action can actually pull support away from environmental policy. According to a report in the journal “Nature Climate Change,” “nudging” people toward smaller, individual actions seems to diminish their support for bigger policy changes, such as creating a carbon tax for polluters.

On top of that, placing the weight of climate change onto your consumer choices can become, well, all-consuming. The guilt of not doing enough — continuing to drive, for instance — might be better funneled into other kinds of action. 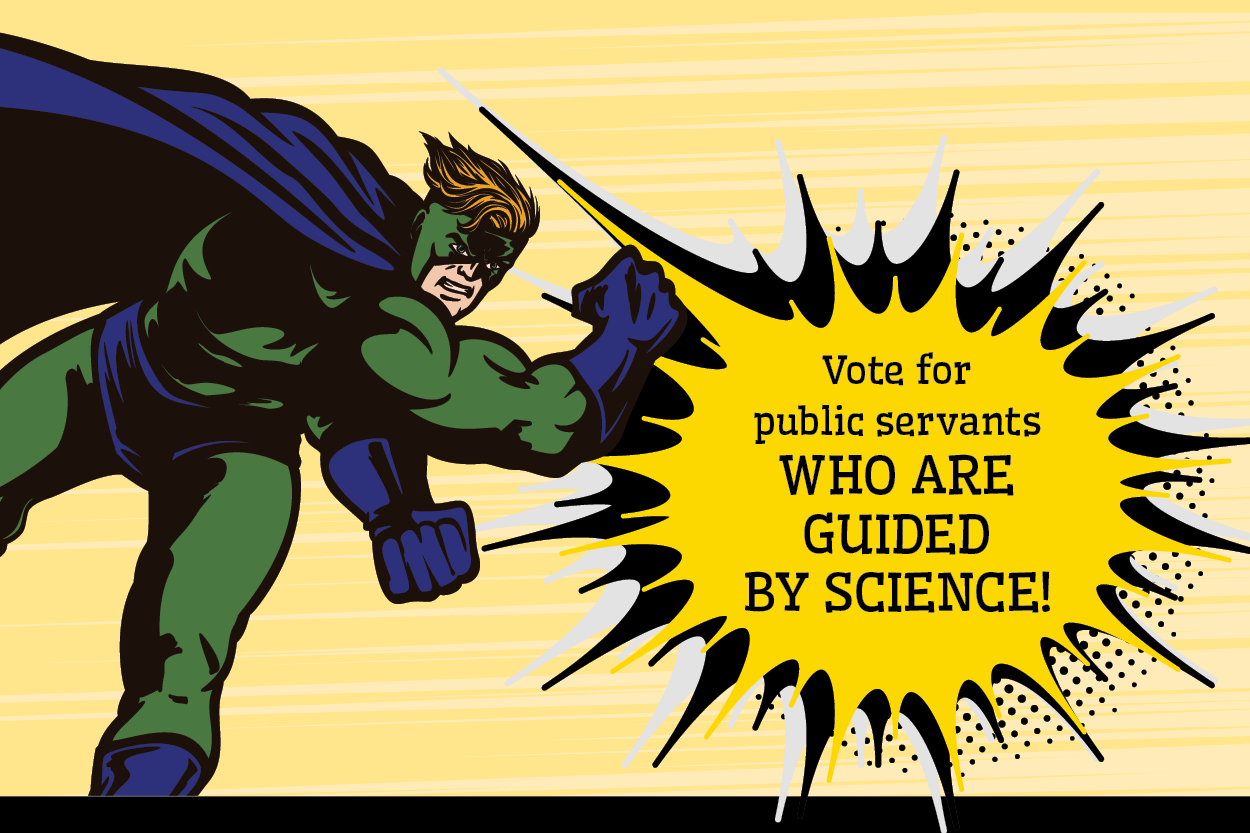 My eyes used to glaze over when I heard terms like “policy” and “regulation.” But environmental policy simply refers to standards and laws that local and federal governments put in place to protect the environment. (Some non-governmental organizations and companies have their own environmental policies, too.) Policy is important to making sure that efforts to halt climate change get the job done. It can have a much bigger effect than individual action.

For instance, imagine you and three climate-conscious neighbors decide to go solar and make your homes energy efficient. You know it’s good for the environment. Your electric bill will eventually go down. So, you make the investment. It’s a step, but four homes are not enough. We need to see entire neighborhoods becoming energy efficient. A policy like this might not benefit building companies directly, but it allows for the kind of sweeping overhaul necessary to slow down climate change.

Experts interviewed by the Washington Post offered a list of 11 policy ideas that could slow down climate change. Among them were ideas for using policy to eliminate food waste, encourage electric vehicle use, make it easier to live without cars, and implement better environmental standards for air-conditioners.

If you can vote, you can select representatives who support the same kinds of policies you do. Gornish noted that it’s important to choose a representative who understands the immediacy of climate change and who is guided by science.

Cyndi Tuell is a Tucson lawyer, ecologist and parent of two. She works with the nonprofit Western Watersheds Project. In an interview, she also noted the importance of engaging with policy. In addition to voting, she says, we can get involved in local politics and school boards in other ways: “Run for office; attend, watch, or listen to meetings; ask elected officials to support legislation or rules; gather signatures; submit letters to the editor.” She told me that this weekend, she and her son were going to collect signatures for a candidate who understands climate change. 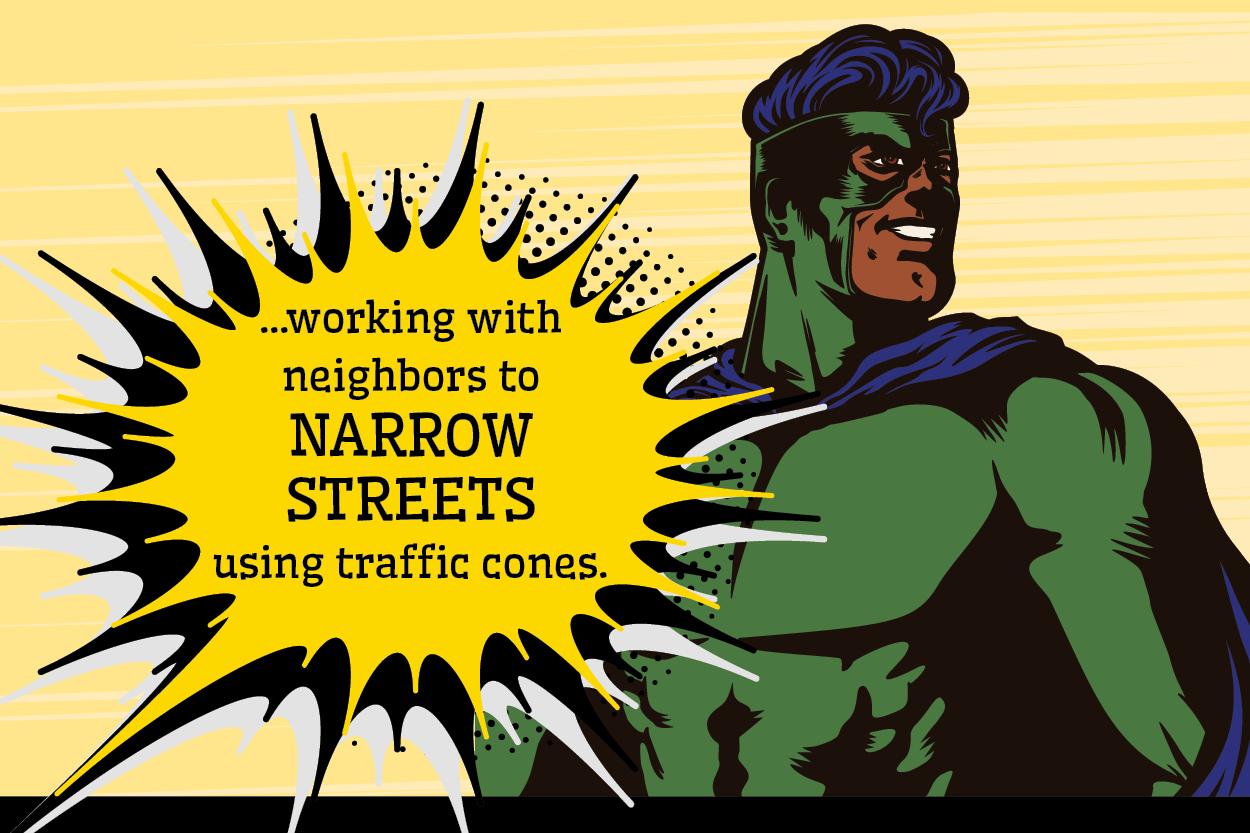 Collective environmental action is about making a group decision to follow through on a project together, often outside of policy structures. Bringing many individuals together usually means you can accomplish more. Additionally, sometimes policy rules that are in place are not enforced. Collective action provides an alternative approach, and one can reveal the public will.

Faffs Riederer, an elementary school teacher and Tucson parent of two, advocates for human-scale transportation. He creates YouTube videos about the issue and organizes with others, too. Human-scale transportation can benefit both the environment and human wellbeing. Riederer said in an interview that changing the way we think about transportation is a collective process that takes place at the level of building. “How fast are you moving? What is the visual experience like? What is the relationship to nature?” he said. “What we build makes those choices for us, to a large degree.”

Turning to local politics for this kind of change can be challenging to navigate. But, Riederer said, collective action can help remake our transportation systems: “Support active transportation advocacy groups. They can keep track of when it is useful to apply pressure” to local government.

There’s another angle, too. “Try out some tactical urbanism,” he suggested — for instance, working with neighbors to narrow streets using traffic cones. “We want to live in places where our kids can walk to school, to a friend’s house, to the store,” he noted.

Alegria Gray is a Tucson behavioral technician and a member of the Sunrise Movement, a nation climate change action group with a local branch. Gray says that showing up to community events in person is important, even if you can only stay for a little while because you have children in tow. This is because being around other people can inspire you to actually take action, she says, even when the ask is as simple as participating in a letter-writing campaign. 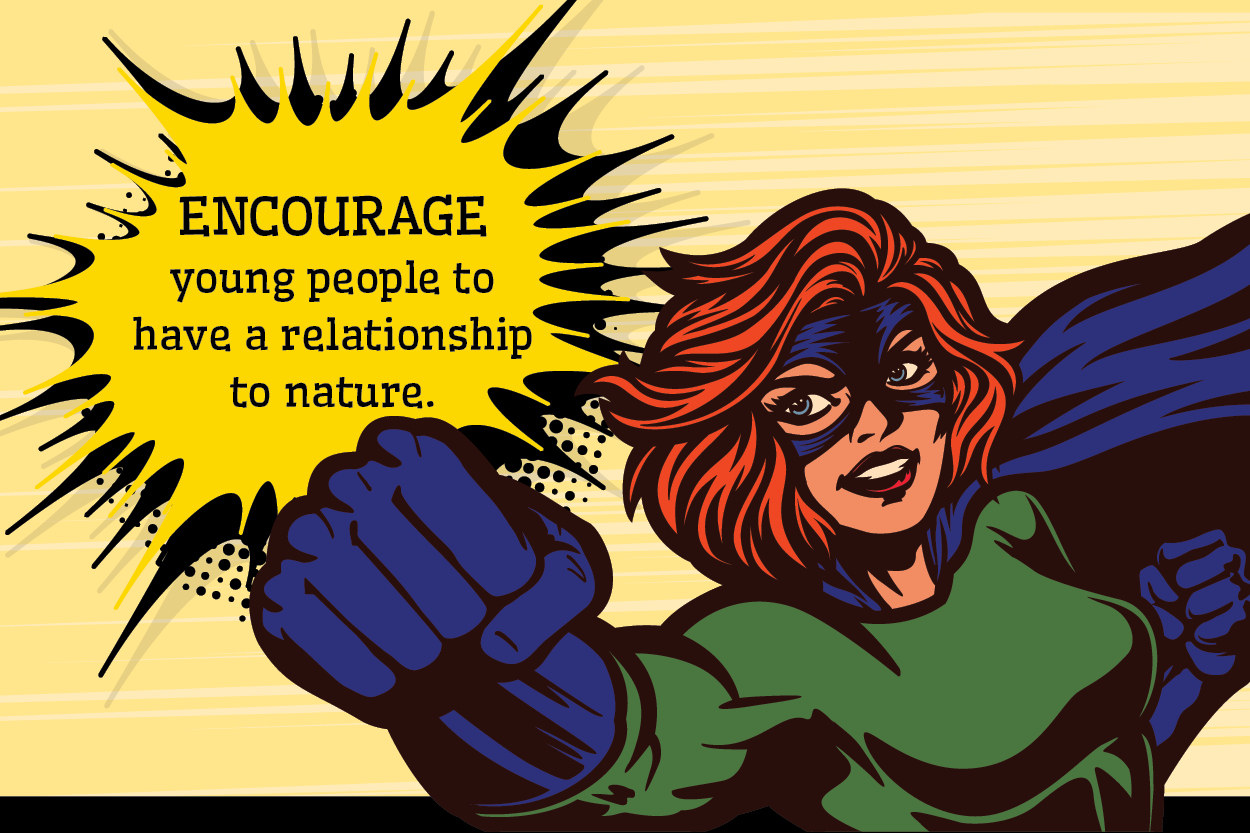 Action style No. 4: Changing the conversation

Think of changing the conversation around climate change as a long game we can all start playing today. It involves shifting the way we talk to our children and acquaintances about climate change and other global environmental issues. We can multiply our impact on the environment if we can bring others on board.

Jacobs frequently takes his daughter, 5, on hikes and camping trips. “We get so caught up in everything human that we forget we are only one little piece in the solar system,” he said. These outings help spark interest in his daughter. “If you lay the foundation, they form their own opinions,” he said.

And Gray pointed to her own parents’ behavior as an example. “We talked about the environment all the time. I grew up learning about the species of the Sonoran Desert,” she said. “Parents can encourage young people to have their own relationship to nature. Let them figure out what they love about nature, and then foster that seed.

Tuell and Gray both mentioned how important it is to connect with neighbors, as well as children. For Gray, action starts with talk. “We tend to get in our heads,” she said, but when we talk to others, we can learn new coping mechanisms. We might even be able to join our neighbors at a local meeting or event they are already attending.

In the end, what our global environment seems to need isn’t a one-and-done action, but rather a new approach — or set of approaches — we can stick with. It’s about solving this climate crisis, but it’s also about revising the way we approach and understand the other-than-human world in the first place. So … what’s your action style?

Talking to kids about the environment

Earth Day is a 51-year-old annual event — celebrated on April 22 — demonstrating support for protecting the environment. It came about in the aftermath of 1960s air pollution and environmental disasters, including a 1968 oil spill off the coast of Santa Barbara, California. More than three million gallons of oil spewed into the Pacific Ocean, killing more than 10,000 seabirds, dolphins, seals and sea lions. After seeing the 800-square-mile oil slick in Santa Barbara Channel from an airplane, Sen. Gaylord Nelson from Wisconsin was inspired to create an environmental teach-in that got the attention of Harvard graduate student Denis Hayes. Nelson hired Hayes to organize the first Earth Day on April 22, 1970, and in 1990, the event became international. Calls are only growing for environmental action in the face of climate change. More than 190 countries participate in Earth Day events — detailed at earthday.org — to diversify, educate and activate the environmental movement worldwide.

Why is climate change a big deal?

Global air temperatures have gone up about 2 degrees Fahrenheit in the past 100 years, and the past five years have been the warmest in centuries. Human activities — such as cutting down too many trees and burning fossil fuels to power factories, cars and buses — are causing the atmosphere to trap more heat than it used to, leading to a warmer Earth. As global warming increases, the intensity and amount of rainfall during storms such as hurricanes is expected to increase. Droughts and heat waves will likely become more intense, sea levels will rise as polar ice caps melt, and several plant and animal species may not be able to adapt quickly enough to survive.

Where can kids learn more?

This meal was provided for RAK in exchange for an honest review of this dining experience. All thoughts and recollections are our own. May 25th...
Read more
Articles

Arizona Helping Hands (AHH) has been helping the most vulnerable and at-risk children in our state for more than 23 years. They are the...
Read more