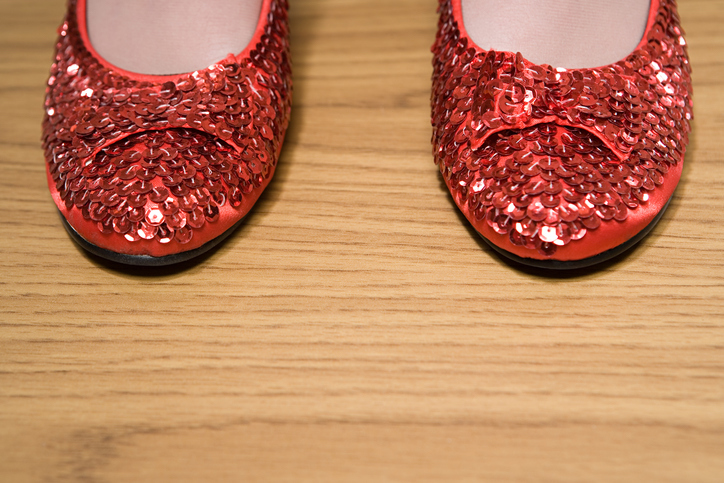 It’s a familiar tale: A tornado rips through Kansas. Dorothy and her dog, Toto, are swept away from the farm to a magical land named Oz.

Hoping for help getting home, they’re off to see the Wizard, following the Yellow Brick Road toward the Emerald City. Along the way, they encounter Scarecrow in need of a brain, Tinman in need of a heart and Cowardly Lion in need of courage. And then there’s the infamous Wicked Witch of the West and Dorothy’s ruby slippers …

Well-known from the classic book by L. Frank Baum published in 1900 and from the 1939 movie starring Judy Garland, the story comes to the Gyder Theater in the form of a musical presented by TheaterWorks at the Peoria Center for the Performing Arts July 12–28.

It comes with a slightly different take.

TheaterWorks has three separate programs: MasterWorks, YouthWorks and PuppetWorks, and they usually have their own productions. However, youth and puppetry are sometimes added to MasterWorks shows, which is the case for “The Wizard of Oz.” (“A Christmas Carol” is another example of a collaborative production among the three.)

Directing “The Wizard of Oz” is Chris Hamby, who is producing artistic director for TheaterWorks. Jennifer Adams is directing the music and Cydney Trent, the choreography.

Why did Hamby want to add puppetry to the show?

“TheaterWorks as an organization values the art form of puppetry,” he says. “We try to utilize puppetry whenever appropriate in our theater work. There is a sense of magic that puppets bring … when they can thoughtfully be used to infuse new energy into a production.”

For this version of “Wizard,” Toto is being specially constructed by Mathieu René in Montreal. While not wanting to give too much away, Hamby does admit that it’s safe to assume there will be other puppets besides Toto onstage. “We have some other puppet surprises planned throughout the show,” he adds.

Leading the 48-member cast as Dorothy Gale is Sarah Pansing, a recent graduate of Arizona School for the Arts in Phoenix. She plans to study musical theater at the University of Cincinnati-College Conservatory of Music in the fall. No stranger to Valley audiences, Sarah’s many roles include Anne in “The Diary of Anne Frank” for Gilbert’s Hale Centre Theatre, Fastrada in “Pippin” for Spotlight Youth Theatre in Glendale and Eponine in Les Misérables for TheaterWorks.

Brianna Funk, who is TheaterWorks’ engagement manager, is Toto’s puppeteer. She also served as puppeteer for Cat in “Peter and the Wolf” and for Melvin in “Sea of Imagination,” which was a PuppetWorks production.

Taking the role of the Scarecrow is Ian Eller, who also played Joseph in another TheaterWorks production: “Joseph and the Amazing Technicolor Dreamcoat.” In addition, he played Brad Majors in “The Rocky Horror Show” for Scottsdale Community Players and appeared in “Cabaret” at the Boston Conservatory at Berklee, where he recently finished his freshman year.

Tinman is played by Jack Monson, whose other TheaterWorks credits include “Beauty and the Beast” and “The Little Mermaid.”

AriZoni Award-winning Jason Washburn, who plays the Cowardly Lion, directed “20,000 Leagues Under the Sea” for TheaterWorks and also designed props for “Beauty and the Beast.”

“There are so many things to love about ‘The Wizard of Oz,’” says Hamby. “You enter into an incredible world of fantasy and meet so many unique characters.”

However, the central theme is what he loves most about this production. Dorothy had the ability to get herself home the entire time, but she didn’t realize it until her companions convinced her to trust her abilities.

“I think all of us have our own pair of ruby slippers and just need a little help from our friends sometimes,” Hamby adds.