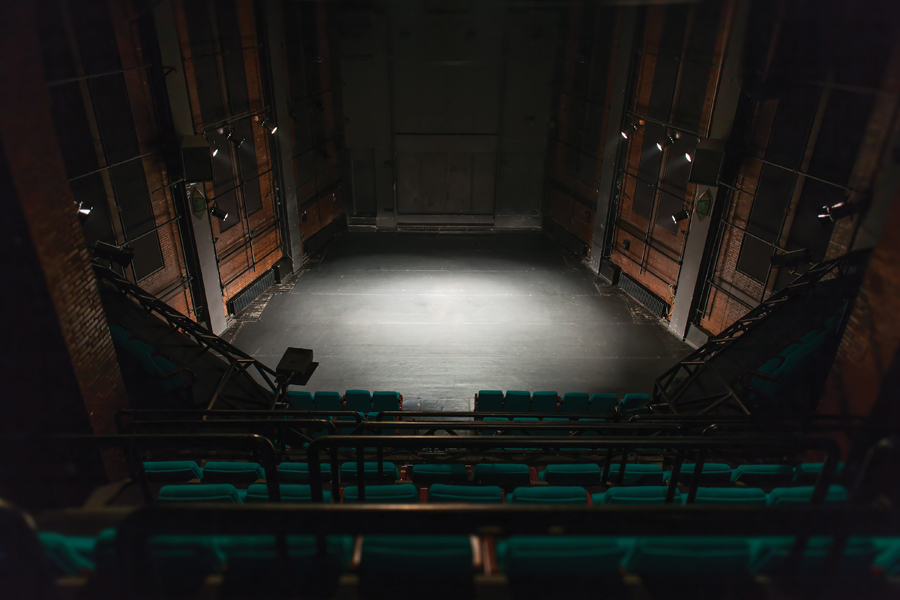 COVID-19 hit the world of live theater especially hard. Typically by now, local theater companies have announced full schedules for the 2020-21 season. Those plans are largely on hold. It could be months before large groups are able to safely congregate indoors.
That hasn’t stopped family-friendly and youth theater groups across the Valley from exercising their considerable creativity. Many have launched innovative ideas to survive the pandemic — virtual summer camps and fundraisers, online auditions and rehearsals and even small-group, live-streamed or outdoor drive-in performances that allow audiences to maintain socially distance.

“Theater is meant to be an in-person experience,” says Karen Rolston, producing artistic director for East Valley Children’s Theatre in Mesa. “However, we knew early on that it was not going to be possible for a while, so right away we started brainstorming what we could do to keep it alive.”

EVCT’s virtual summer classes ended up being a hit. “We found that many of the kids and parents liked the virtual classes, and they went really well,” Rolston says. “We did a radio play that turned out to be an amazing show. Kids did the sound effects and great character voices, because that is all there is.”

Now, EVCT is working on its first virtual play, to be presented on Sept. 19. “This is sort of a trial run to see what kinds of things we can do with it,” says Rolston, adding they also have shows scheduled for October and November and are looking at options including recorded shows and drive-in performances from a portable stage in the parking lot with sound piped directly to people’s cars.

Greasepaint Youtheatre in Scottsdale went dark on March 15, having finished its run of “13 The Musical,” which had sold-out houses and 40 kids in the show. It regrouped to offer online summer camps and Zoom dance classes and hosted a drive-in parking-lot show to showcase graduating seniors.

“We did not charge for that,” says Maureen Dias-Watson, producing artistic director of Greasepaint. “We wanted to lift up the kids graduating, who were missing so much of what should be the best of times. We filled the lot, and that was a blast!”

Beginning in August and wrapping early this month, Greasepaint also rolled out “Thriller Thursdays” offering live-streamed radio plays from the 1930s and ’40s, starting with the original (and infamous) radio script of “War of the Worlds” and ending with Edgar Allen Poe’s “The Fall of the House of Usher.”

“We think [it’s a] fun, challenging and a great learning experience to have our kids try their hand at acting with their voice alone — something none of them has ever been asked to do in the world of musical theater!” says Dias-Watson. Each performance has a live studio audience of 25, wearing masks, and six to eight performers, all socially distanced.

Greasepaint is currently building a deck-style stage in its courtyard for five nonmusical plays starting Sept. 18. “We know it’s safer to be out of doors, and with the gorgeous weather in Arizona in the fall/winter, it presents a perfect opportunity,” she says. The plays will feature small casts with socially distanced seating. Audiences will be limited to 40 people and all must wear masks. The shows will include comedies, dramas, classics and brand-new pieces. Rehearsals will be held via Zoom until the week of the performance, when the cast will gather outside to block and stage the show.

“Like all other arts organizations, Phoenix-based Valley Youth Theatre has been significantly impacted by COVID-19,” says Bobb Cooper, VYT’s producing artistic director. Staff of the Phoenix youth theater started working remotely in mid-March. VYT had to cancel the last two shows of its 31st season, and the first two — and likely three — shows of its 32nd.

“We’re also working on playwriting opportunities for kids to devise stories dealing with COVID-19,” says Cooper. “Because we’re doing things virtually and not paying for designers, costumes and lighting, we can afford to try things that are less commercial and have more of a social impact.”

Despite the innovations, changes have been tough on staff and students, who miss “the supportive, creative energy of being in a physical space together.” Cooper says. “I’ve been heartbroken for all the young people who have lost so much time and opportunity to develop and share their talents.” 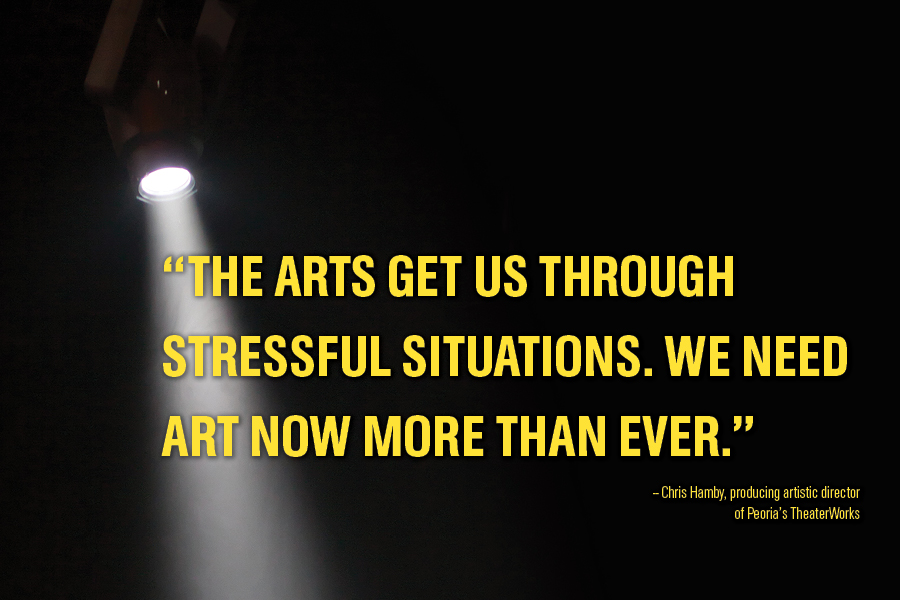 Chris Hamby, producing artistic director of Peoria’s TheaterWorks, says 2020 started out promising and came to a screeching halt that led to 85 percent of the staff being furloughed.

“We were on course to have our largest year of growth,” he says. “We were fortunate to have two of our guardian angel donors come forward and provide funds to launch a matching giving campaign to help TheaterWorks sustain ourselves during the time when none of us knew how long this pandemic would last.”

Hamby and Managing Director Cate Hinkle have since brainstormed and explored Hamby’s long-held interest in immersive theater. Through Oct. 18, TheaterWorks will present “Curiouser and Curiouser,” a first-of-its-kind multi-sensory theater experience that allows small audiences to walk through the world of Alice in Wonderland. Recommended for ages 16 and up, the 100-minute show encompasses visual art, music, dance, puppetry and theater and is available to up to 10 participants per performance. Masks and gloves are required (and will be provided) and numerous other safety procedures will be in place.

“For now, we have a program that will fill the void and give the community a revolutionary way to experience live theater,” says Hamby, who adds TheaterWorks was able to bring back staff and hire designers with the help of a Payroll Protection Program loan. “It has been an amazing journey, invigorating as an artist to be able to innovate and create something from the ground up. We are also hoping those that were never interested in theater will give this experience a try.”

Spotlight Youth Theatre in Glendale ran in-person summer camps with a small group of actors, following strict safety protocols that included masks or face shields at all times. “The families got it, and the kids got it, and the camps were very successful,” says Kenny Grossman, artistic director.

Based on that experience, Spotlight plans workshop-style shows with small casts this season. Each show will end with live performances in front of 28 people and the option to watch it live streamed. Spotlight also will offer virtual theater classes, including a 10-week “Homeschool Show Program,” and plans to do a monthly “Car-Baret” performance in the theater parking lot.

“I’m super excited about some of the shows we are finalizing right now,” says Grossman. “They will be life changing and very creative. … Even though we are very limited on how we can present our season, we are not limited on the creativity that will come out of it.”

Ginny Temple of Desert Foothills Theater in Scottsdale says the theater was financially impacted by having to postpone three of its shows last season, but staff members kept strategizing. “We offered a very small performance camp this summer that included all safety precautions,” she says. “The final performance was attended by a parents-only audience but live streamed on Facebook for virtual audiences.”

This month, Desert Foothills is presenting “Lion King Jr.,” live with many safety protocols. Opening-weekend performances are sold out but tickets are still available for Sept. 25-27.

“Actors have temperatures taken, wash hands, and wear masks,” Temple explains. “The audience size will be limited, and seating will be set observing social distancing guidelines. Actor’s animal masks will be creatively constructed from full-face shields. We are also planning for the hopeful option of ticket selling for a virtual performance.”

While innovations have helped these nonprofits through months of dark theaters, there is still plenty of uncertainty about when and how life — and live performances — will resume a new normal. Or what that will look like. Cooper hopes some of the online innovations Valley Youth Theatre has been exploring will continue even once we resume attending live theater en masse.

“Working with these young people again has been exhilarating, invigorating and inspiring, to say the least,” he says.

However it plays out, local theater directors emphasize the importance of the arts to any community — especially during tough times.

Facebook
Twitter
Pinterest
WhatsApp
Previous articleParents of students with learning differences have a right to independent, paid evaluations
Next articleCreating safety for children through gender-inclusive language