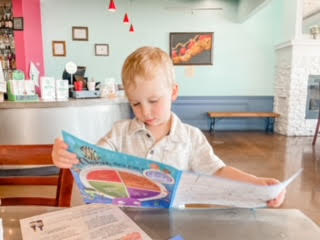 RAK received this meal for free in exchange for our thoughts. This review is our honest experience with bringing the family!

My husband and I were recently discussing how our oldest two boys (8 & almost 3) are not what we would call ‘adventurous eaters’. Not picky, by any means, but just not always willing to order new things off restaurant menus.

So when Pita Jungle reached out and asked if we’d we willing to take the kids and try their restaurant I was a little worried. I knew Pita Jungle had a Mediterranean (and healthy!) inspired menu and was concerned the kids might not find something to order. You can see the menu here. 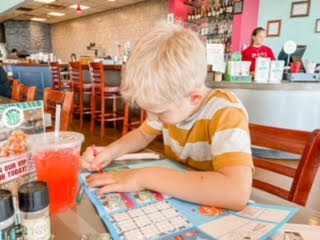 I showed up with 3 kids in tow and when we walked in my oldest said it smelled really good (phew!). The kids were able to get Shirley Temples (their favorite!) so they were already warmed up to the idea of eating here. The server got us some menus and kid activity books with crayons. There were plenty of activities in these books to hold them over until food would arrive! We had fun playing tic-tac-toe and finding words in the crossword puzzle. 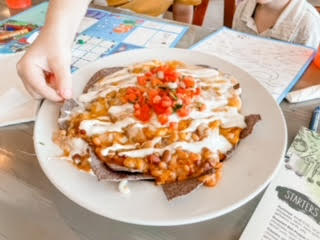 We took a look at the appetizers and nearly everything called out to me but after discussing with the server we opted to go with the Blue Corn Nachos because it was familiar. My son was hesitant because…”yogurt? On nachos?”. Our server told him it was more like sour cream and that he should definitely give it a shot. As it turns out, he devoured the entire plate!

We had a harder time with the entree menu–there were so many delicious sounding choices! My son really wanted a burger (of course) and despite trying to get him to try a bowl, or pita wrap he was SET on that burger. The server told us the closest to a ‘regular’ burger was the Kafta Burger with a pomegranate molasses ground beef patty (mixed with onion, parsley, and jalapeno!). It also had arugula, tomato, onion, and a chipotle hummus. So we decided on that and my son was ready to try something ‘out of the box’. I ordered the Avocado Garbanzo Southwest Salad because I love grains, avocado, and chick peas! For our toddler we built a bowl off the kid’s menu which he thought was fun! He loves getting to choose his own items so the handy colored wheel allows him to pick one item from every category. He chose chicken, mac n’ cheese (obviously), broccoli, and the seasonal fruit (which varies!). Here are the kid choices. 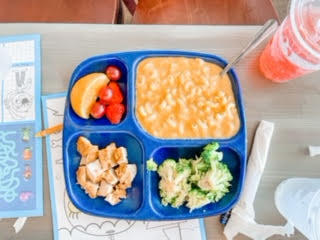 The kid’s meal comes out on an adorable cafeteria style tray so none of the food touches (how did they know?) and the chicken is already cut into small bites which makes my job easier! 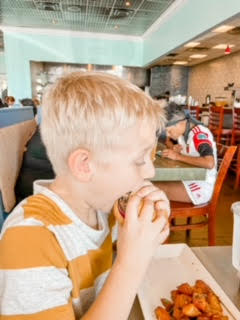 My son demolished the burger with garlic potatoes and said it was definitely one of the best burgers he’s tried. He told our server that next time he’s willing to try one of the pita wraps! 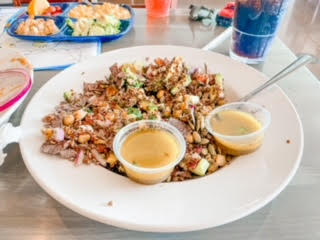 My salad dressing was delicious. The perfect amount of crunch from the pumpkin seeds balanced the quinoa and it featured a herb-honey-apple-cider vinaigrette which I’m on a mission to recreate at home so I can put it on all my salads! Or maybe I’ll just order online for delivery from Pita Jungle again soon and skip the work!

Bottom line: Pita Jungle is definitely a great pick for kids! There was so much on the menu that I need to try so we’ll have to add this restaurant to our dining rotation. Plus, I always consider it a bonus when I get to add a parenting teaching moment for my kids and I think they’ll be a little more willing to try new and interesting foods when we’re out.

Enter to win a $50 gift card to take your own family! Giveaway ends October 11.