Actions speak louder than words, and so it is with 16-year-old Lexie Robertson.

While a group of shivering parents stand poolside, bundled against an unusually cold morning, Lexi’s getting ready to jump into the water at Dolphinaris in Scottsdale.

Lexie doesn’t speak — she has autism and cerebral palsy — but her enthusiasm is clearly evident. Barefoot and wearing a wetsuit, jumping up and down because of the cold and excitement, Lexi is ready to take the plunge for a chance to swim with dolphins.

The experience is thanks to a program called Sea STAR. Officially launched in January, Sea STAR offers dolphin-assisted therapy to children with special needs.

“The premise behind dolphin-assisted therapy is simple,” says Sea STAR Founder and Executive Director Krista Roland. “Increasing a child’s attention increases a child’s development. Over time, it can be challenging to create a breakthrough therapy moment from home or in the classroom.”

Roland, who has a master’s degree in special education, learned the ropes of dolphin-assisted therapy in Florida and says, “It gives specialists a new way to unlock a child’s potential.”

Up to six children are able to get in the water with the dolphins. The program pairs a dolphin trainer with a specialist and a child. Once the little groups are in the water (some stay on the pool deck), interaction with the dolphins is used to motivate the children to work on skills related to speech and language, social interaction and motor and cognitive development. 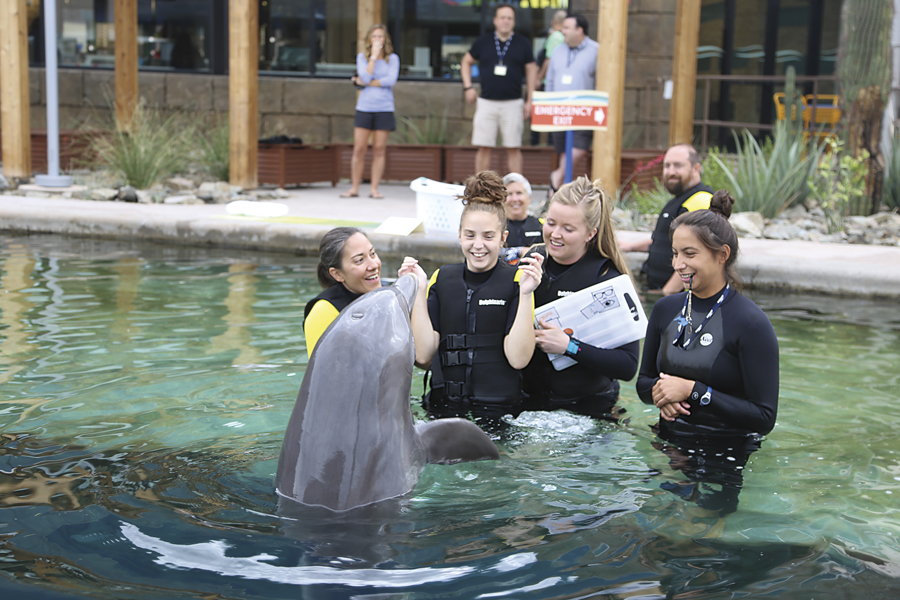 Lexi slowly wades out into the water, still jumping a little with excitement. She doesn’t hesitate as her therapist moves her toward the dolphin. With hand motions, she is able to give the dolphin commands and even touch the animal. Watching from the deck, her mother, Andrea Robertson of Paradise Valley, describes how the program has helped her daughter.

“In a new environment, it usually takes her one to two to three times to get comfortable. But wanting to get in the water to see the dolphins, to be able to get closer to the dolphin or touch it, just made her want to follow directions and learn something new much quicker,” she says.

This therapy results in her daughter being able to flourish in new situations more quickly, Robertson says.

“Instead of having a new toy sit by her for four or five days, now she might reach out and play with it [right away] because she wants to. It just gives her the skill of being able to enter a new situation, because her brain is moving faster.”

Most of the time Dolphinaris caters to the general public, allowing swimmers to interact with the dolphins. Time is set aside in the morning for Sea STAR, with the facility open only for those with special needs.

While critics of Dolphinaris — located in the OdySea in the Desert complex on the Salt River Pima-Maricopa Indian reservation near Scottsdale — say it’s cruel to keep dolphins in confinement rather than in open waters, Roland stresses the bright side of dolphin encounters through her program.

“The Indian community here has a very large heart for those with special needs. There is also a large focus on making things accessible, so when we came to them with our program idea, they loved it,” she explains.

Robertson concurs from her vantage point as the mother of a child with special needs.

“I want you to know that the people running this program are taking such amazing care of these dolphins,” she says. “These dolphins are so loved, and this environment for these special needs kids is something that you wouldn’t ever think that you could find for your child.”

Ask a pediatrician: How to stay safe this flu season

What can pregnant moms do to stay safe this flu season? Are there complications if the flu is contracted during pregnancy? Staying healthy while...
Read more
Articles

If you're looking for a fun way to celebrate Halloween with your toddler try this easy sensory bin with affordable items you might even...
Read more
Articles

While October is traditionally known for Halloween and spooky costumes, it is also a month that shines a light on mental health. Through awareness efforts...
Read more