Home Articles The language of disability: Words matter, but getting it right isn’t easy
ArticlesHealth and SafetyParentingSpecial Needs

The language of disability: Words matter, but getting it right isn’t easy 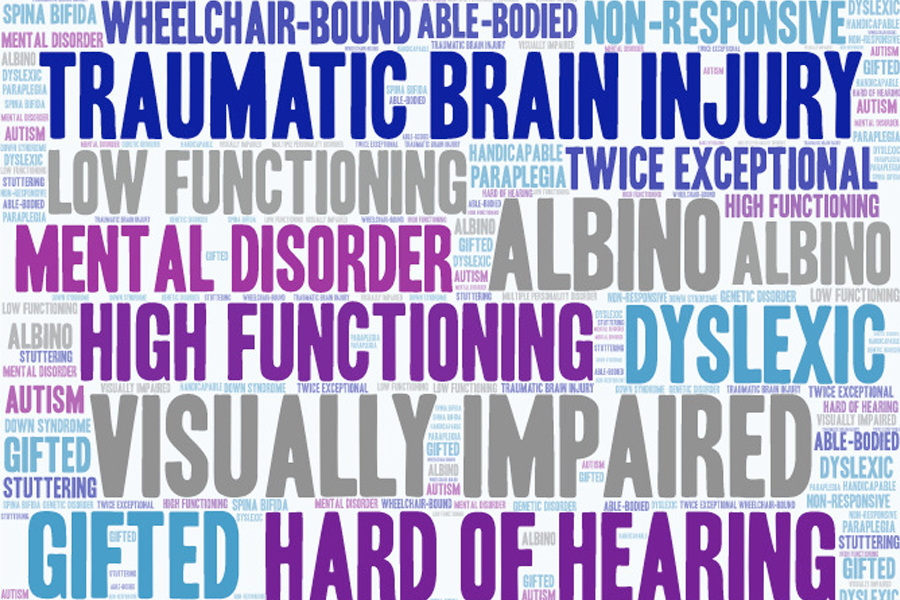 I used to love the term “mouth breather.”

I loved it so much that I once stopped reading a column my then-boss had written for the newspaper where I worked, stood up mid-paragraph, and marched to his office to compliment him in person for calling a member of Congress a mouth breather.

Hilarious. So clever! I chuckled for days.

Many years later, I stood over a crib and watched my sweet baby girl sleep. Her mouth was open, tongue hanging out. This is not unusual for Sophie. People with Down syndrome tend to have small openings (like nostrils and ear canals) and tongues that don’t quite fit their small mouths.

I watched Sophie and felt my stomach drop, as I realized just what “mouth breather” means. And to whom it refers. I had to sit down.

I worked for a paper that prided itself on taking no prisoners, telling it like it is, championing the truth. Pick your cliché. We did good work, but the worst thing you could call someone in our newsroom was politically correct.

Sophie is now 16 years old. She has been my greatest teacher. And one thing I’ve learned in the classroom of life is the power of language.

“Just because you can say it doesn’t mean you should,” is what I tell my writing students these days.

Language and how we look at it has changed quite a bit since my then-boss wrote that column in 1997, and in a lot of ways, it’s more complicated than ever. Particularly when it comes to disability.

I still use the f-word, but I’ve abandoned the r-word. Most of us know by now not to use the word retarded, but really, there’s not much agreement beyond that.

Even the word disability is fraught, as I learned in the summer of 2018, when I was hired to edit a style guide on disability language.

The guide is published by the National Center on Disability and Journalism, housed at the Walter Cronkite School of Journalism and Mass Communication at Arizona State University. The center has been housed at ASU since 2008; the guide is older than that. It had been updated several times over the years, but needed a thorough scouring. I spent months interviewing experts, scouring Twitter for relevant conversations and talking to people with disabilities.

Because language changes so quickly, especially in this arena, the guide will likely need another overhaul soon. NCDJ’s guide is designed for use by journalists, and it’s sorely needed, because the bible of the industry, the AP Style Guide, doesn’t address much of this.

Turns out other people need it too, and in the year since I completed this project, I’ve had requests from all kinds of people who wonder just how they should be talking about disability.

There are more than 200 terms discussed in the guide (ncdj.org/style-guide), so I can’t tell you about all of them. But I can give you some key points that might help you navigate this arena:

It’s important to acknowledge that the rules are constantly changing in this arena and that nothing is black and white. Person-first language is relatively new. Not so long ago, the term “special needs” was widely considered the most sensitive way to refer to a person with a disability. That description is now facing scrutiny, as evidenced by the recent #NotSpecialNeeds social media campaign.

I do understand the desire to control others’ language, particularly for parents of children with disabilities. When you have a disability or care for someone who has one, you often have so little control over your world. You might not be able to get your kid a school placement that works. The airline might damage your wheelchair. Medical issues can be impossible.

But language is something you can always take charge of — and sometimes, for me, the best way I can feel like I’m in charge of my world and Sophie’s world is to call someone out for using the word retarded, or referring to her as a “Downs kid.”

But I’ve tried to pull back lately, to offer polite corrections instead of angry admonishments. We run a real risk that if we aren’t gentle, people will stop talking about disability altogether.

And we don’t want that, either.

Amy Silverman is a longtime Valley journalist and is on the advisory board of the National Center on Disability and Journalism. She is the author of “My Heart Can’t Even Believe It: A Story of Science, Love and Down Syndrome,” and is working on a second book about what it means to come of age with an intellectual disability. Learn more at amy-silverman.com

Q&A: What to do if a child gets stung, bitten or impaled by thorns

Yes, the Sonoran Desert is full of critters — many of whom are more active during the summer months. It’s also filled with sharp...
Read more
Articles

The heat is here, and with it long days of staying indoors. If there’s a silver lining to the pandemic, it’s that we now...
Read more
Articles

Treats, car shows, crafts, activities and concerts! Here are some ideas to show dad how special he is to you. Give him something sweet: Alien Donuts...
Read more