Home Articles Using Common Sense: Talking to your kids about the war in Ukraine
ArticlesEducationParenting

Using Common Sense: Talking to your kids about the war in Ukraine 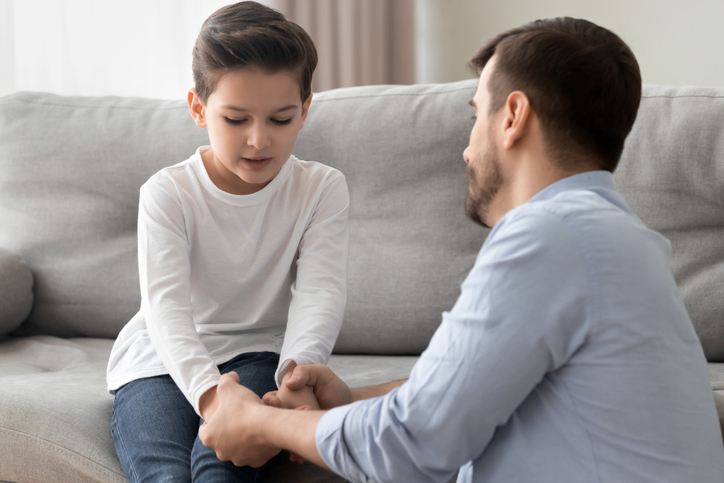 If your child is on social media, or even just watches YouTube, you can be sure that they’ve already been exposed to violence on the news. Even if they don’t have phones yet, they’re hearing bits and pieces from friends and family or from TV, the radio, and the internet.
The modern dilemma of managing your own emotions — anger, confusion, sadness — when it comes to violence while also trying to comfort and reassure your kids has become all too frequent.

As much as we wish we could shelter our kids from the worst of the world, bad news has a way of reaching them. But even when we’re struggling, our kids still look to us for answers. We are the ones who can help them process terrible news and offer hope.
The Russian invasion of Ukraine is the latest on a long list of difficult news for children and young adults to process. Young people are being bombarded with images showing the brutality of war and, naturally, they’re scared.

Young kids may not know about the conflict, but tweens and teens may well have heard things from friends or seen worrying memes on Instagram or TikTok, experts say.

It’s another period of uncertainty after the two tough years of a pandemic and that may be particularly difficult for an already anxious tween or teen, says Rachel Vecht, a former primary school teacher and founder of Educating Matters, which supports parents in the workplace.

“Be on the lookout for any signs of anxiety or stress, such as being unusually quiet, interrupted sleep, loss of appetite or trouble separating,” she says.

According to Jill Murphy, vice president and editor-in-chief at Common Sense Media, talking helps. “Don’t feel like you need to cover everything in one sitting,” she says. “Mostly, just be there for your kids. Note how they’re reacting and give them extra hugs if they seem to need it.

“Ask … and listen,” Murphy adds. “Try to get a sense of what your kids know before launching into an explanation.”

Younger kids may have overheard adults talking or snippets of TV or radio news, which can be scary and even traumatizing. Older tweens and teens hear about the war in the Ukraine and other violence from social media, YouTube, TV and friends.

“Not always reliable sources for facts,” Murphy adds. Vecht said children need to know that Ukraine is far away, and they are safe.

“But be careful about constantly having the news on in the background or exposing children to scary images,” she says.

If your children are anxious, give them outlets to express their emotions such as drawing, journaling, imaginative play or “writing thoughts down on bits of paper and placing them in a ‘worry box’ so they can let those feelings go,” Vecht suggests.

Experts say it also helps to talk about other world conflicts that have created similar anxiety levels for us all before, and which have been resolved.

Kids also value the news. The majority of those surveyed said the news makes them feel smart and knowledgeable.

News is still a human endeavor for kids with more children trusting news from family than from any other source — yet about half get the news through online media (primarily YouTube, Twitter, Instagram and Facebook), which they said they preferred.

Common Sense Media has a list of news sites and apps specifically designed for kids, including News-O-Matic and Newsela, as well as sources appropriate for teens, such as NPR and HuffPost Teen.

Parents can use these kid-friendly sources as a jumping-off point to discuss how news is reported and how to be a critical media consumer, Common Sense’s Murphy says.

“It’s important to help kids understand how to identify legitimate news sources and avoid stuff that’s too partisan or even completely fake, she says. “Encourage your kids to find out what’s happening in the world.”

• Be honest and direct. It’s not necessary to go into extreme detail, but don’t try to hide anything, either. Depending on your kids’ ages, say something simple and succinct.” Kids will hear all sorts of stuff from others, but you want them to hear the truth from you.

• Reassure kids that they’re safe and provide some closure. It’s important for kids (especially younger ones) to feel that they and their immediate family aren’t in danger.

• Explain context and offer perspective — in small doses. Around the tween years, kids become interested in and capable of understanding complex social issues. With your life experience, knowledge, and wisdom, you can begin to explain the circumstances around issues of gun violence, racism, and political rhetoric. Not an easy task, but this is the process that gives things meaning and clarity — and it’s important for kids to be able to make sense of negative and unpleasant things.

• Accept their sources but expand their horizons. Kids get most of their information on places like YouTube, Instagram, and TikTok. Teach them to question what they see by asking themselves, “Who made this?” “Why did they make it?” “What’s its point of view?” “What information isn’t included?” and “What would my friends think of this?” These media-literacy questions help kids evaluate information, think beyond the clickbait headline or meme, and look more deeply into a topic.

• Offer hope. Exposure to sad and depressing news can make kids world-weary. But knowing they can contribute something positive to the world can counter those feelings. Talk about meaningful ways you can reduce future problems, whether it’s attending a rally as a family or signing a petition. Banding together helps kids feel better and recognize that they’re not alone in their sadness. It also boosts the resilience they’ll need their whole lives — and it may actually benefit the greater good.

Ilana Lowery is the Arizona director for Common Sense Media, an independent nonprofit dedicated to helping kids thrive in a world of media and technology by empowering parents, teachers and policymakers. She can be reached at ilowery@commonsense.org