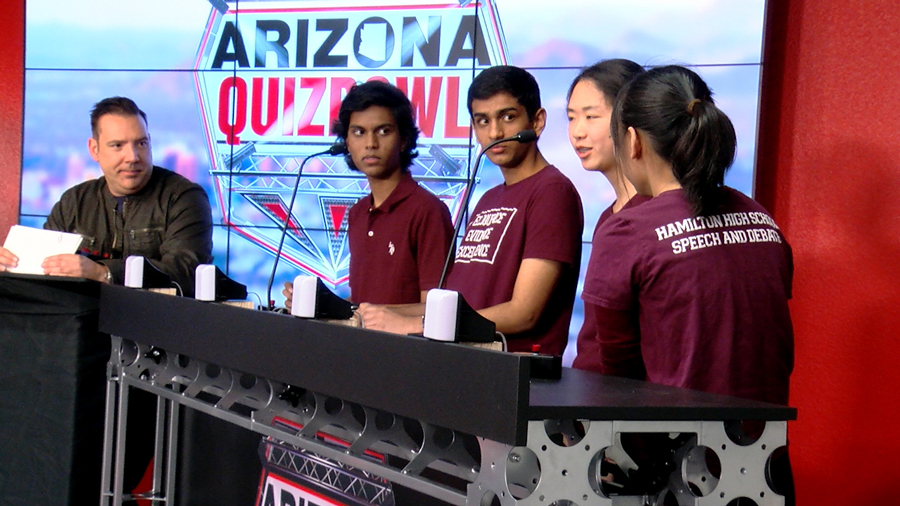 Hippolyta was the queen of what warrior tribe from Greek mythology? If you know the answer to that question, consider yourself well informed. And if you’re an Arizona high school student, you could be a candidate for a new show: Arizona Quizbowl.

The show premieres on CW Channel 6 and 61.1 (KASW) at 9 p.m. on Thursday, Feb. 1, and will air at 7 p.m. Sundays thereafter through May. It features some of the best and the brightest in our state in an academic competition for prizes and fame.

Two teams from different high schools square off against one another in a battle of the brains. The tournament-style show is hosted by Rich Berra of KISS-FM’s Johnjay and Rich Show.

“I love that academics are the base of our show — highlighting great kids with brilliant minds,” Berra says. “I poke fun at myself for not knowing a lot of the stuff, but man these kids are smart!

The game does have a professional, fast and furious feel to it as the students race to give the right answers before their opponents beat them to the buzzer. Two teams compete in each round, with four students from each school taking on four students from another school.

The teens are clearly having fun as they try to answer the questions faster than their opponents. And Berra likes to keep the action moving. He’s torpedoed some questions because they might slow down the game.

As Berra likes to say, it all builds up to a “Super Quizbowl.”

The CW partners with the Arizona Quizbowl Association, which helps schools determine which students are strongest through a series of test tournaments. The questions come from the National Association of Quiz Tournaments, which writes and distributes the questions for local, state and national Tournaments. Eventually some of the teams from Arizona may compete with other teams from across the country if they qualify for the national tournament.

“I care about this so much, I don’t take any money for it,” Berra explains. “Anything they would pay me goes to our Love Up Charity. I’m doing it for love of the game. It’s six hours out of my Saturday.”

This father of three did bring all of three of his children to the first taping. Berra says his daughter has created a version of the game on her cell phone with a buzzer that they now play around the dinner table.

“Part of the reason I do this is for my kids,” he says. “I tell them all the time, (school) is your job right now. I think it’s important to empower kids with (the idea) that it’s not just being a jock that makes you special. Being at the top of your class is a really special thing, too.”

Berra is hoping the game will become a hit in the Valley. For details on how to get involved with an existing team or to start a Quizbowl team, visit azquizbowl.org.

And if you didn’t get the answer to that question about Hippolyta in Greek mythology: She was the queen of the Amazons.