HomeArticlesRed for Ed: Was Arizona teachers' strike a moment or a movement?
ArticlesEducation

Red for Ed: Was Arizona teachers’ strike a moment or a movement?

When a whopping 800,000 students missed school during the teacher walkout in late April and early May, community “armies” of parents, volunteers, businesses, churches, and agencies across Arizona rushed in to help.

Emily Grieff opened her home for children of working parents and passed out lists of businesses, churches, and organizations that offered free or affordable childcare.

“A friend of mine in another school district took in seven children into her home one day,” said Grieff, a substitute teacher and mother of Eva, 7, a second-grader at Mercury Mine Elementary School in the Paradise Valley Unified School District.

Churches nearby rounded up dozens of volunteers and offered day camp, as did dozens of popular kids venues, from the Children’s Museum of Phoenix to the Arizona Science Center. Across the state, companies like Honeywell and Intel allowed parents to work from home or opened onsite daycare. GoDaddy gave parents $50 daily childcare reimbursements. 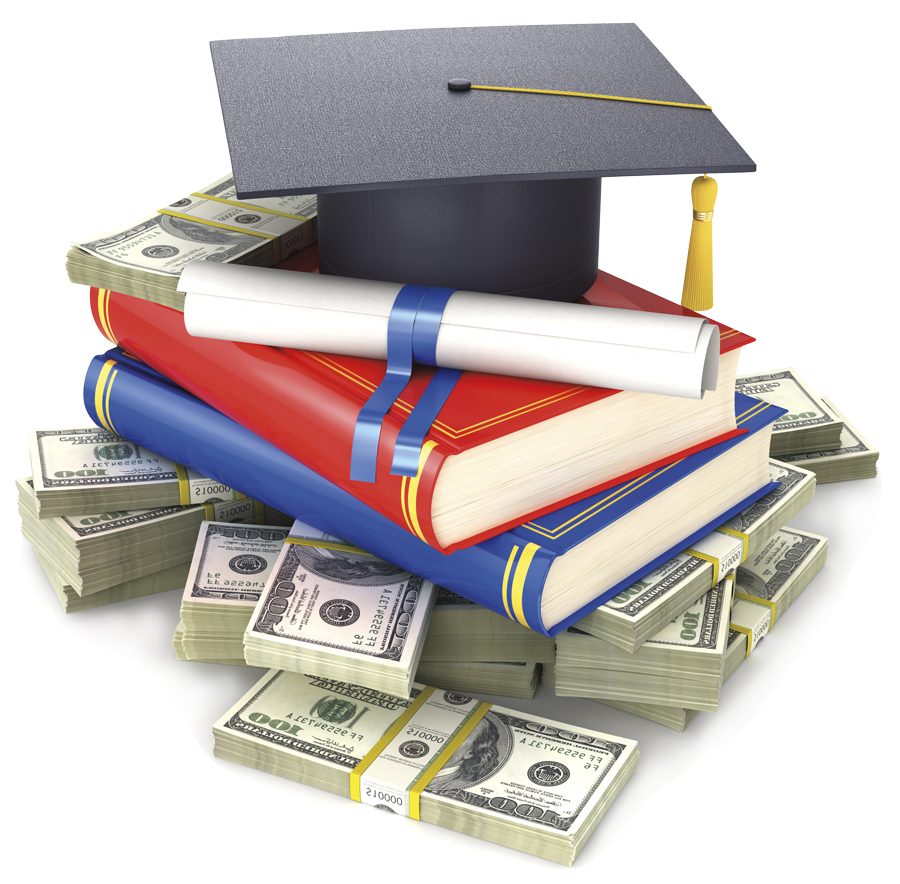 Though parents and employers were inconvenienced, almost everyone cheered when lawmakers passed a state budget raising teacher salaries up to 20 percent by school year 2020-21 and increasing support staff pay and funding for schools and universities. Under the plan, the average teacher salary in Arizona is expected to increase from $48,372 to $58,046 by 2021, including a 9-10 percent raise for the 2018-19 school year.

For years, Arizona has been near the bottom in spending per student and teacher pay, and teacher vacancies have been at near-crisis levels.

“Some of my friends felt so strongly [about raising teacher pay], they kept their kids home the entire strike because they didn’t want to be ‘strikebreakers’,” said Helen Rowe, whose two young children attend Cave Creek Unified School District schools that were shut down for two days.

“It was still stressful,” said Rowe, field director for the McDowell Sonoran Conservancy in Scottsdale. “My husband had to take our son to work with him one day, which wasn’t ideal, but it worked.”

Their 6-year-old daughter Fiona went to a makeshift ballet camp at Adaptive Force Performing Arts in north Scottsdale. For their son Hayden, 8, they found a climbing camp at AZ on the Rocks.

“I was really relieved when they went back to school, but I was just happy for the teachers, that they were able to work it out,” Rowe said.

During Arizona’s historic, six-day teacher walkout, more than 50,000 supporters marched at the state capitol, enduring blasting heat to call for higher pay for teachers and support staff and more funding for schools.

They were fueled by a Facebook post in Arizona and teacher walkouts in other states — including West Virginia, North Carolina, Oklahoma and Kentucky — that rank low in school funding.

May marks the third time education funding has been increased in the past two years in Arizona following years of cuts in education spending. In March, legislation passed that extends Proposition 301 for 20 more years and provides $667 million a year for Arizona schools. (Originally passed in 2000, it created a 0.6-cent sales tax intended to be used for improving schools and was set to expire in 2021). And two years ago, voters approved Prop. 123, which uses state land trust funds to help invest $3.5 billion in K-12 over a decade.

Concern remains that Gov. Doug Ducey’s budget is based on overly optimistic projections for a growing economy and that it does not provide a permanent funding source for education. Also, it’s unclear whether Arizona will remain near the bottom now that other low-ranking states are moving up. According to the National Education Association, the 2017-18 national average teacher salary was about $60,483.

But the momentum created could carry to this month’s primary elections and the general election in November.

“In my mind the biggest victory is it made people aware,” said Jill Cooper, a STEM teacher at McDowell Mountain Elementary School in the Fountain Hills Unified School District. “When you go down to the gallery and you watch these budget hearings at the legislature, it’s very frustrating. They just vote along party lines.”

Cooper became a liaison for the Facebook group Arizona Educators United and the teachers in her school district when no one else would step up. “We have to be in the loop,” said Cooper, who is not a member of the teachers’ union. “We don’t want to be 50th anymore.”

What to expect at the polls

A common chant at the #RedForEd marches was “Remember in November.” Cooper and other teachers and parents say they are watching their local and state races more intensely. A number of teachers, including Arizona Educational Foundation 2016 Teacher of the Year Christine Marsh, are running for office in their legislative districts or against state schools superintendent Diane Douglas in the Aug. 28 primary election.

All 90 seats in the Republican-controlled House and Senate are on the ballot and, for education advocates, the election has a distinctly partisan feel. Forty current and former educators are running as Democrats for legislative seats, according to the Arizona Democratic Legislative Campaign Committee.

Education funding is top of mind for the educators running, including Marsh, who has taught in Arizona for 26 years. “I would love to move something forward that would reduce class size,” she says.

Scottsdale teacher Eric Kurland says he’s running for state legislature in District 23 because he’s frustrated with what he sees as the state’s lack of support for education, attempts to expand a voucher-style program and efforts to restrict citizens’ ability to pass initiatives.

“This is a referendum on education right now,” Kurland says. “We are at the tipping point with 50 percent of Arizona teachers leaving in the first five years, and 25 percent of our teachers retiring in the next one or two years.”

Maybe nothing better illustrates the widespread discontent on education than the race for state schools superintendent. Douglas, a Republican in her first term, has four GOP challengers and two Democrats. 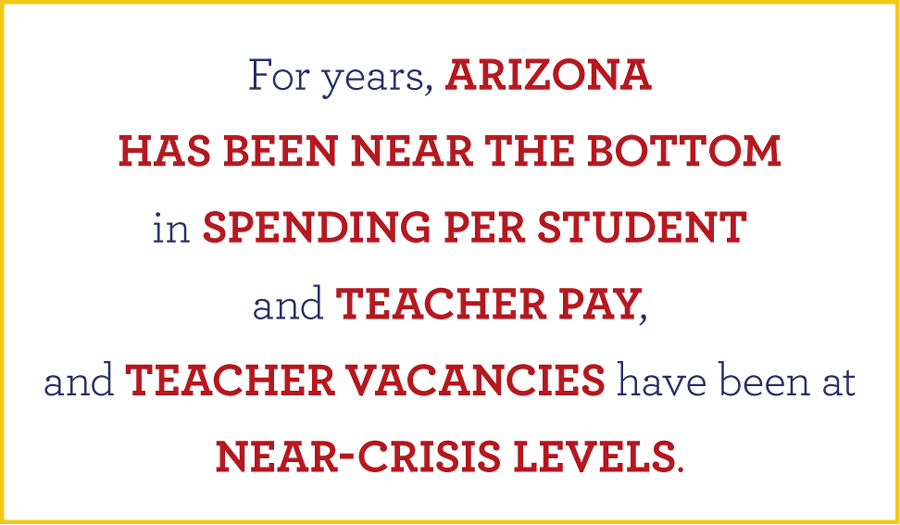 Everyone running against Douglas has a background in education or school administration — something Douglas did not have when she was narrowly elected over David Garcia, a Democrat with a doctorate in education who is now running for governor. This summer, Douglas urged state officials to punish teachers for the walkout, which has gotten no support.

“I think parents and teachers are going to be smarter about their voting,” said Grieff. “Before the walkout, I didn’t really understand politics. I didn’t get it. Now, I realize how much of an impact politicians have and how important it is to have a person who represents us.”

For the general election, there is only one education measure currently on the ballot: Prop. 305, which lets Arizona voters decide whether any parent can take their child’s per-student funding from public schools to use for private or home-based education. Known as Empowerment Scholarship Accounts, they were originally created for special-needs students whose families can opt out of the public school system to get specialized care.

“This would give another $700 million for our public schools and get us back to at least our 2008 funding levels. We’ve suffered a billion dollars in cuts,” says Noah Karvelis, co-founder and spokesman for Arizona Educators United and an Avondale teacher, who says he’s still reeling from the Red For Ed support.

Sen. Kate Brophy McGee, R-Phoenix, vice chair of the Senate Education Committee, is convening a bipartisan task force to help find a permanent school funding solution. McGee was instrumental in getting Prop. 301 passed, and she and Rep. Doug Coleman, R-Apache Junction, blocked a bill that would have prevented voters from deciding the voucher issue in November.

She feels confident the state has sufficient education funding based on budget projections for the next five years but admits there’s still work to be done. A three-term state legislator from central Phoenix, Brophy McGee could face Marsh in the November general election.

“We still need more dollars to be competitive within our region and nationally for teachers,” she said. “Even with these substantial funding increases, we are not fully restored to pre-2008 funding levels.” 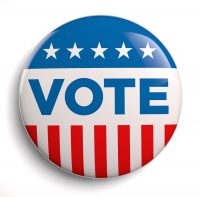 Democracy is for those who show up. Citizens who want to vote in Arizona’s Aug. 28 Primary Election must be registered to vote by July 30. To vote in the Nov. 6 general election, you must be registered by Oct. 9. Register, find your polling location or check your voter registration status at servicearizona.com

At your polling place on Election Day, you will need to show a valid Arizona drivers license or other valid United States federal, state, or local government-issued photo identification. If you have no photo ID, you can present two non-photo documents that show your name and current address, including a current utility bill, bank statement or a valid Arizona vehicle registration.

You can also request to be placed on the Permanent Early Voter List and be mailed a ballot for each election that you are eligible for so that you can vote from home. Visit azsos.gov/elections/voting-election

Seven candidates are running to be Arizona State Superintendent of Public Instruction. Winners of the Aug. 28 primaries will face off on Nov. 6. Read more about these candidates on the Arizona Secretary of State’s website.