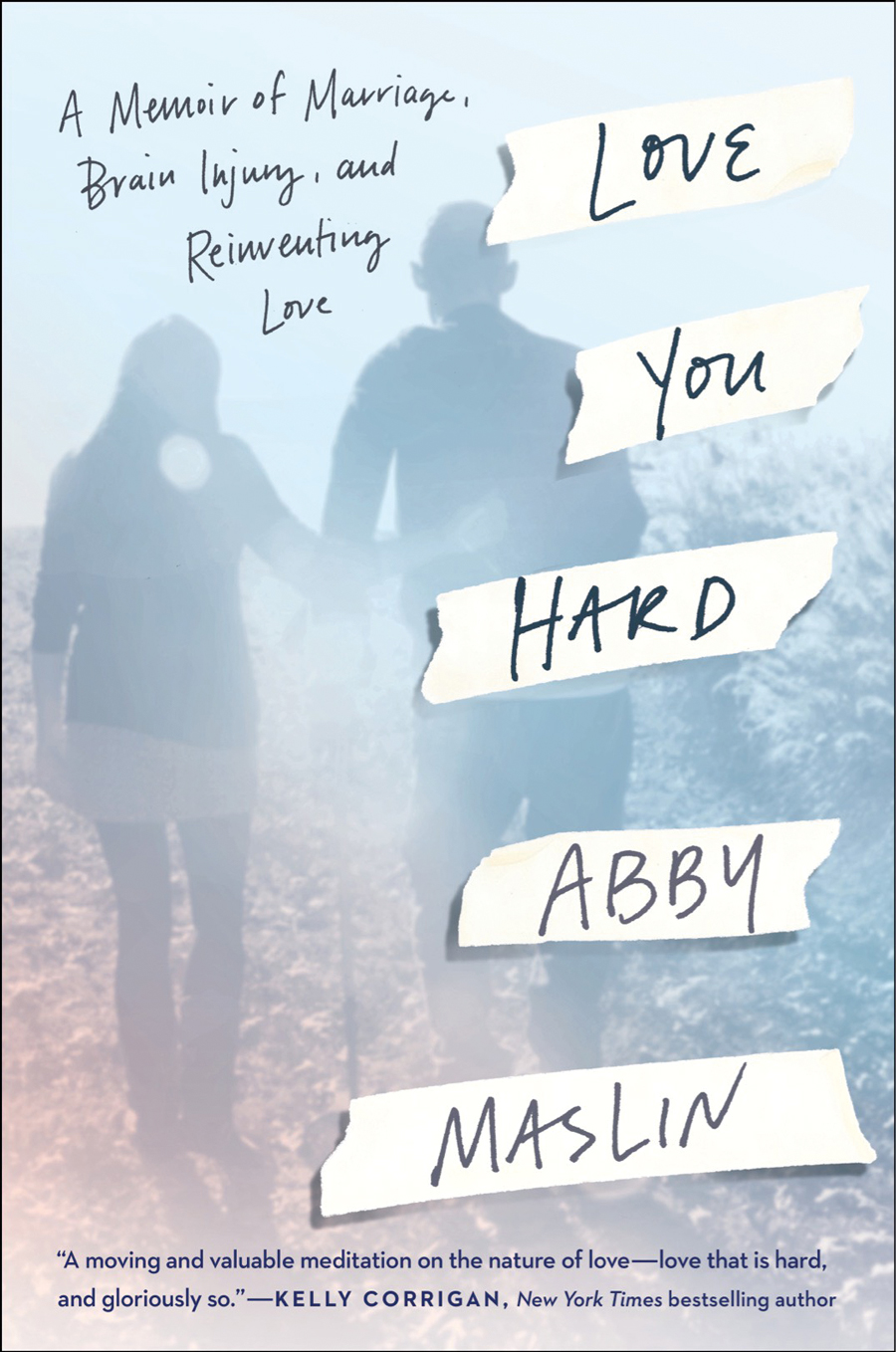 Most of us gain perspective in tiny increments, from a steady drip of experiences that push us to accept, adjust, reframe and recalibrate our lives over time. It happens so gradually we can’t pinpoint a specific moment of change. It’s like a child you can’t see growing, but notice, one day, is an inch taller.

For author Abby Maslin, wisdom came like a tightly compressed crash course after a brutal mugging left her husband, TC, with a traumatic brain injury so severe his doctors at first thought he would never walk or talk again. In a new memoir, “Love You Hard,” she shares her journey — from the initial days of terror, grief and confusion through the challenges of communication and caregiving, to a new plane of existence that brought acceptance, peace, clarity and recommitment to her fierce love of husband, family, friends and community.

Maslin, who spent part of her childhood in Phoenix, returned to the Valley recently during an early leg of her book tour. An event at Changing Hands Bookstore in Tempe had the feel of a family reunion, with lots of hugs, laughter and tears with people who “knew her when.” During that event, and a subsequent interview by phone, she talked about her book, which was released March 12, readers’ initial reactions to it and where her extraordinary journey may take her next.

In the summer of 2012, TC and Abby Maslin were living the dream. Careers they loved — he was an energy analyst; she was an elementary school teacher. A second-floor home near Eastern Market in Washington, D.C. A young son, Jack, whose arrival rocked their world in the best possible way.

TC was so attached to Jack, in fact, that he almost didn’t go out that night. He couldn’t bear the thought of missing precious time with his toddler son. But it was baseball season, and he had a chance to enjoy a Washington Nationals game with his brother. With Abby’s blessing, he decided to go.

At 10:30, he called Abby to say goodnight. He was stopping for a quick drink with some friends. She went to bed. When she awoke the next morning, her husband’s side of the bed was untouched. TC was not there.

Hours later, she was at the hospital, trying to comprehend what had happened. As TC walked home at about 12:30 a.m., three young men jumped out of a car, holding a gun and demanding that he empty his pockets. Even while TC was cooperating, one of the men knocked him in the eye with the butt of the gun. Another bashed the left side of TC’s head with an aluminum baseball bat. Then they fled.

Battered and bleeding, TC stumbled away, looking for help. He passed out on the porch of a home whose occupants were out of town. That’s where the police found him.

Maslin takes readers into her deepest thoughts and emotions as she moves through that first morning and everything that follows — including her struggle to reconnect with the very different version of her husband who emerged from the hospital six months later. Her telling of it is mesmerizing and surprisingly relatable. Few of us experience trauma on this magnitude, but none of us escape the hard work of reconciling life expectations with reality.

Maslin’s family first moved to Phoenix when she was in second grade, and her dad, Martin E. Sullivan, was director of The Heard Museum, a job he held for most of the 1990s. She attended Hopi Elementary School for a year and a half before transferring to Arcadia Neighborhood Learning Center (renamed Echo Canyon School in 2017), where her mom was the librarian.

Maslin was in the first class to “graduate” from ANLC, which opened in 1990 as something of an experiment: an alternative educational environment featuring multiage classrooms and a student-directed learning approach considered cutting edge for a public school.

Maslin remembers lots of opportunities for hands-on, real-life lessons. Like the time she decided to raise money for her school by hosting a “dessert theater” talent show and went around town soliciting donated desserts from restaurants and stores. “There were all these opportunities to be independent,” she says.

It was a perfect learning environment for a kid like Abby, who was by nature outgoing, imaginative and intellectually curious. Even then, she loved writing. Her teachers would “let me write all day if I wanted to.” They encouraged her to read her stories (some as long as 20 pages) to the class.

Maslin also pursued interests in theater and dance. She performed with what was then a newly launched Valley Youth Theatre. She danced in Frances Smith Cohen’s “Snow Queen” under the tutelage of Susie Silverman of Dance Theater West. (Silverman was in the crowd at the Changing Hands event.)

Those interests continued after Maslin’s family moved back east. All the way through high school, she gravitated toward creative outlets. But by the time she graduated, she was seeking something with more reliable employability. “I knew that writing/theater/acting was not going to be my grown-up life,” she says. She became a teacher.

Two and a half weeks into TC’s hospitalization, Maslin tried to write an email to update people she knew were concerned about them. Her sister Bethany suggested she write a blog instead. That way, Bethany said, anyone who was interested could follow along.

That first post exposed some of the “rawest kind of emotions I was feeling,” says Maslin. “The worst thing that could possibly happen had happened. I had nothing to lose by sharing my heartbreak.” The post went viral: 5,000 hits in a matter of hours.

Months later, she submitted an essay called “Love You Hard” to a literary contest, and won. That drew the attention of an agent.

She started her book during the second year of TC’s recovery, when he was doing better, but found she couldn’t finish it. The strain of post-traumatic stress (on both of them) and the pressure of trying to redefine and accept their changed lives and relationship didn’t make for much of a happy ending.

Abby, empowered by her creative, empathic teaching skills, had been a big factor in TC’s continuing recovery. But she was drained by the exhaustion of caregiving and the loneliness of a marriage so different from what it had once been. And while the couple had re-established a life routine, the deeper-level communication of thoughts and feelings remained challenging.

The story of how she emerged from that stage is this book’s best gift to the world. This is where you learn what Maslin had to accept about herself before she could move on. It is a lesson all mothers, all caretakers, all givers, must eventually confront about themselves.

Maslin went back to her story, writing it in pieces, “then spent many years fitting it all together.” She says she rewrote the book six times, “to teach myself to write.” What kept her going? Remembering how fervently she wished she had been able to find a book like this “on all those lonely nights when I was searching the Internet for [traumatic brain injury] stories that had happy endings.”

She’s adamant about emphasizing this is her story. “I didn’t try to tell our story, only mine,” she says. “I could never tell the survivor’s story.”

Reactions to her book have been “so beautiful!” she says. “That’s been the most affirming part of this. People have opened their lives to me, telling me their own stories. There are lots of tears at events. Not just from people in the brain-injury community, but anyone who’s been through a deeply difficult time and suffered in some way. Even people who are content with their lives — when that layer of honesty gets peeled back, it’s liberating in some way.”

By the fourth year, TC’s recovery had progressed to the point where he could resume driving and became more independent. That’s when the couple’s daughter, Rosie, was born.

Rosie will never know, and Jack will never remember, the “before” version of their dad. Jack was their source of light and normalcy when everything else seemed to be spinning out of control, Maslin says. Rosie is clearly the reaffirmation of a love that transcended enormous sacrifice and challenge.

After several moves around the country (“for a while we were too freaked out to live in D.C.”), the family has returned to the nation’s capital. “We missed D.C. and decided not to be making decisions out of fear,” Maslin says. “We were not going to let that assault rob us of anything else.” Besides, she says, “safety is an illusion. You can’t make your decisions out of fear. You have to make them out of love and joy.”

TC is back at work in an office overlooking Dupont Circle. Abby has returned to full-time teaching. Largely because she is a teacher, Maslin harbors no ill will toward the young men who upended their lives. “A lot of people wanted me to be angry [at the assailants],” she says. “But I’m an urban-area teacher. It’s not a mystery to me that these kids feel like they have no options in life.”

For at least the short term, she plans to continue her “double life” as full-time teacher and part-time author, using every available break to travel the country to speak about her book. She wants to keep writing, and plans to tackle fiction next.

“I have a lot of passions,” she says. “I’m lucky I get to pursue a lot of them. I want to say yes to all of them.” But like most young mothers, she faces a persistent struggle for balance.

“Sleep is a huge factor,” she says. “I realized that when I was trying to write in the middle of the night. Sleep is critical. For me, movement is critical, too. If I don’t do yoga or at least go walking every day I start to lost my creative faculties — I don’t feel like I’m living inside my body. My third boundary is putting more of a line around my time with TC. We’re just like everyone else. Our ‘special time’ together is usually like, ‘The kids finally went to bed, so do we work or do we numb down on Netflix?’”