Home Articles The art of the squeal: Tweens are hungry for scary books
ArticlesBooksAges & StagesElementaryTweens and Teens

The art of the squeal: Tweens are hungry for scary books 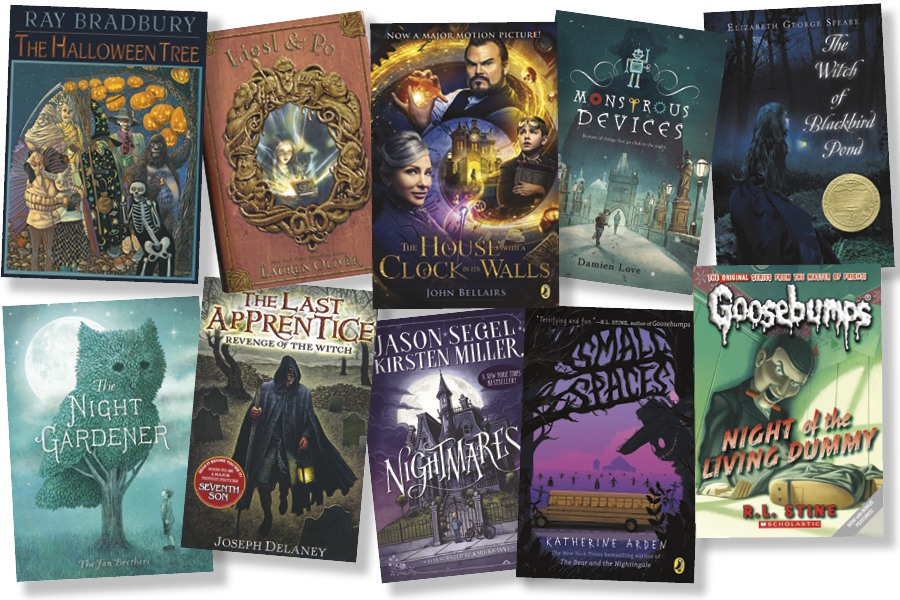 Do you remember the “‘satiable child” of Kipling’s “Just So Stories?” The little elephant whose curiosity was impossible to satisfy reminds me of tweens’ enormous appetites for scary books.

Why do pre-teens consume stories that scare them silly? The reasons are not silly at all.

Author-illustrator Ella Frances Sanders observes, “We do seem to make sense of ourselves and the world as a part of a narrative — we think in terms of main characters … and where the beginnings, the middles and the endings are.”

This is true for all humans; but especially for children, because the dark place under the bed, the unknown behind the closet door, and the shadow at the end of the hall demand language and context. So, for as long as there have been kids, there have been kids who crave scary stories.

A quick, unanticipated pop-out “Gotcha!” or “Boo!” from behind a door or a tree doesn’t cut it. It’s not like curing hiccups. To be effective, a proper scare requires a slow, stomach-churning, nerve-wracking progression — from everything’s OK to but, then! and then! and then! — to disaster, and just maybe, survival.

The creepier, more frightening the monster or alien, the better. Kids want to shout, scream, cry and occasionally have nightmares — and they’re doing it with books.

Providing tweens with the means to scare the bejeepers out of themselves is big business in 2019. Some of the credit for this goes to relaxed mores, leisure time, mass and social media, disposable income and reading initiatives. But if demand for this product didn’t exist, no amount of marketing savvy could account for the fact that R.L. Stine alone has sold almost a half-billion books since 1992. (Stine will be speaking at 6:30 p.m. on Friday, Nov. 1 at Burton Barr Central Library in Phoenix.)

Teachers and librarians note that as kids become independent readers, reading often becomes a social activity, and kids choose to read scary. They tout their favorite titles; they lend, borrow, bond and even compete over them. That might explain some of the numbers, but it doesn’t get to the why.

It can’t be as simple as providing conceptual guardrails for things that go bump in the night. If that were true, parents’ logical reassurances and a few applications of spray-on monster repellant would have done the trick back when tweens were preschoolers.

Academics have weighed in on this topic over the years. They all agree that it’s normal for children to glory in the gruesome, but disagree a bit as to why. They say kids like horror stories because they are curious or they are thrilled by abnormal and disgusting stuff or because they need a safe space to face actual fears or because horror makes them challenge the boundaries between the known and unknown. Like the story of the blind men and the elephant, in which each man touches a different part and thinks he knows what the animal looks like, each theory is partly right, but none of them gets the whole picture.

Horror writer Victor LaValle comes closer to the heart of the matter, I think. He recently wrote in the New York Times that he loved reading “Scary Stories to Tell in the Dark” because it was validation that the world was a scary place: “That’s all I wanted as a child, someone to admit that what I felt wasn’t ridiculous or wrong.”

Kids aren’t stupid. At age 7 or 8, they begin to notice that the sugarcoated version of the world they’ve been given has cracks in its colorful candy shell.

Speaking as a former kid who was obsessed with monsters, I would add that I loved scary stories because I loved the rush of extraordinary excitement they brought, and I loved having some power, even if it was only over my own imagination. I could stop the scare whenever I wanted. I could close the book. I was in control.

Many adults don’t remember just how little power children have. I know, it doesn’t feel that way when your 2-year-old throws a tantrum in the produce aisle at Safeway, but it’s true. That fizzy mixture of fright and exhilaration kids drink in when they chose to scare themselves isn’t on the menu when they are just plain scared. Adults sometimes forget what real fear tastes like, whether it’s rational or not.

I grew up in a century-old house and spent my childhood terrified of our gigantic octopus of a furnace, and of the nailed-shut trap door to the attic in my closet ceiling, but I couldn’t avoid the basement or my bedroom.

And I couldn’t unsee the map of Florida topped with a bullseye frozen on the family TV screen that October night in 1962, when we thought the Russian missiles were coming. I was 9, and I believed the world was ending.

The world didn’t end of course, but my sense of security did. Scary stories were an escape, a diversion; and at the same time, they were imaginary dress rehearsals for pushing back against the darkness. Vicariously and safely, I could practice being brave. I could be a hero.

Kids are generally pretty good judges of how scared they want to be, even if the reasons why are often lurking in their subconscious. Adults should respect the art of the squeal.

Today’s tweens have a lot on their plates — so much that I think they’re going to need bigger plates. Global climate change is the new elephant in the room — bigger and faster moving than all the woolly mammoths of last Ice Age put together. Active shooter drills are, sadly, now facts of school life.

In comparison, scary stories are pretty small potatoes; but if they give tweens a taste for overcoming existential threats, I say “Bon appétit!”

So many books, so little time

If a tween read two scary books per week from age 8 through 12, that’s only a little over 500 books. There are literally thousands of titles in this genre, and more are published every year. It would be so easy to miss that perfect read. To help readers find their horror happy place, the children and teen librarians at every branch of Phoenix Public Library will help kids parse the sub and the sub-sub genres and help tailor personal reading lists accordingly. Some favorites are illustrated above.