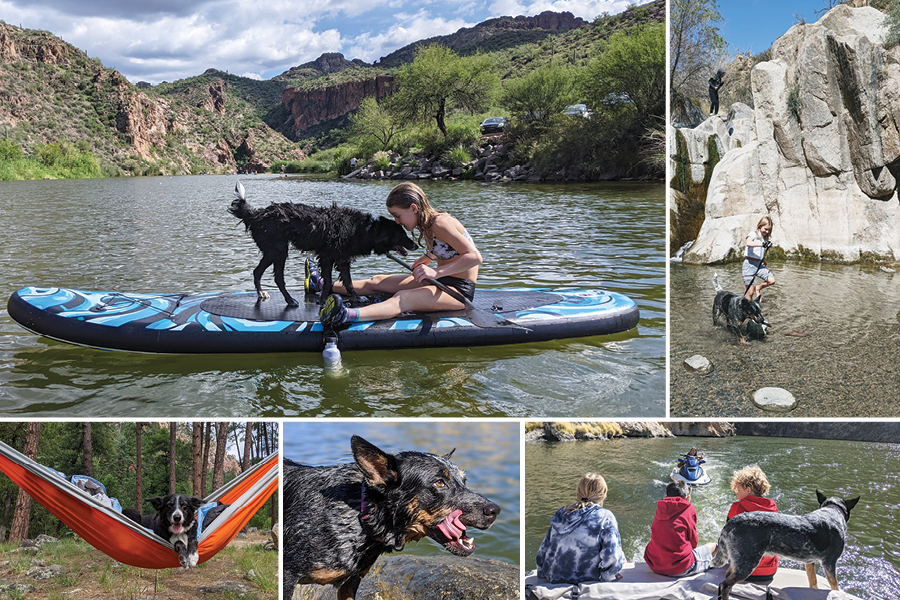 Every time we adventure out, we’re faced with a decision. Someone asks without fail — whether it’s out loud or subliminal: “Are we taking the dogs?”

I can’t keep track of how often we say “yes” and proceed to formally ask Jessie, our border collie, and Miss Elliott, our blue heeler, if they’d like to come with us, but it’s often. They’re not the type to just go for a ride to the store or the post office like some dogs. We take them when we know there’s a destination they’d appreciate. We firmly believe that they believe they’re human and worthy of adventure, just like us, so we take them with us as frequently as possible. Miss Elliott lays the guilt on thick either way. She actually packed her favorite toy in our camping bins as we prepared to leave for our last trip, not knowing she was invited when she packed it.

We know we’re not alone in our love of dog companionship. The American Veterinary Medical Association reports nearly 40 percent of Americans own dogs. We thought back about what we’ve learned along the way with these girls as we’ve taken them out boating, hiking, camping, swimming and paddling.

We’ve learned a lot, beginning with the fact that the old adage about old dogs not being able to learn new tricks is just garbage. They do. At 10 years old, Jessie is a testament to it. As anxious as she is friendly, Jessie has learned over the past four years to hike responsibly, paddleboard, swim, camp and find the safest spot on a boat (under the legs of the captain, obviously).

And what have the kids learned from Jessie overcoming her fears? Quite a bit, as they’ve cheered for her to find the courage to jump in the lake or comforted her as she cowered during a hike in the middle of a thunderstorm. Beyond learning empathy and unconditional love, they’ve also earned a sense of responsibility when it comes to packing the gear the dogs will need, stopping to give them water, finding their pace and managing their needs in the midst of whatever adventure we’re on.

We often talk about taking an adventure just for the dogs. We’ve heard of a restaurant in Northern Arizona that has a dog menu in addition to a human one and serves the dog bites on frisbees. We’ve thought about how to plan a trip just for them — which would mean packing copious amounts of bacon!

Whatever adventure is out there for you and your pup — be it a hike to see fall leaves or a campout in the mountains — some of these pointers may be helpful.

Hiking. We’re lucky to live in a place with incredible trails to explore in every quadrant of the Valley and beyond, and even luckier that we’re allowed to bring our dogs on most of them. I say “most,” because there are exceptions to every rule, so be sure to check online if dogs are allowed on a certain trail before packing up and heading out. When you do head out, be sure to bring a leash, a harness (if your pup is extra assertive on the trail), a collapsible water bowl and dog poo bags (preferably compostable) to clean up any messes along the way. We recently bought dog booties, too, after a walk to the mailbox ended prematurely because of the heat. Dogs walk a little funny in the booties at first, lifting their legs super high (which made us all laugh), but they help protect their paws on the trail — from the heat, rough surfaces and cacti.

Camping. Not every dog is outdoorsy. I realize that sounds crazy, but like people, most dogs are used to living indoors, and camping out is a different experience for them. The first time we took ours, we ended up sleeping in hammocks. The dogs had an entire tent to themselves, and it totally worked out for everyone. However the sleeping arrangements go, we’ve found our dogs are happiest if they have dedicated space. It also makes the humans happy to not wake up to a dog leg in the face. During the day, most campgrounds require leashes at all times, but dispersed camping gives the pups a little more freedom. As for meals, we like to have a set meal time for the dogs and close up their food so no other critters are drawn to it.

Watersports. Here’s where we split the ticket. Miss Elliott loves to swim and boat, since she gets to “eat” the waves as they roll by. Jessie does better in a kayak than in a boat and on a paddleboard, although she whines less than Miss Elliott on the board. All of this is to say that dogs are very likely their own canines when it comes to watersports. Photos of cute dogs sitting perfectly on paddleboards may not be your reality, and images of calm pooches as the captain of a kayak may not be, either. But, if you’re willing to try and willing to get wet, it’s a fun adventure, even if it’s not the picture of perfection. We would recommend a dog life vest, though, even if they are good swimmers. Jessie decided recently, after falling off the paddleboard, to make a swim for shore, even though it was far away.

Dogs love every adventure, though, don’t they? Even if it’s just up the road, to the school pick-up line or through the drive-thru to get coffee, they just want to be with their people, even if it means learning a new, adventurous skill.

Lisa Van Loo is a Gilbert freelance journalist. Ron Abelar is an avid outdoorsman and photographer. Together, they are parenting five children. Follow them on Instagram @RaisingOutdoorKids