Using Common Sense: Media Use by Tweens and Teens on the Rise 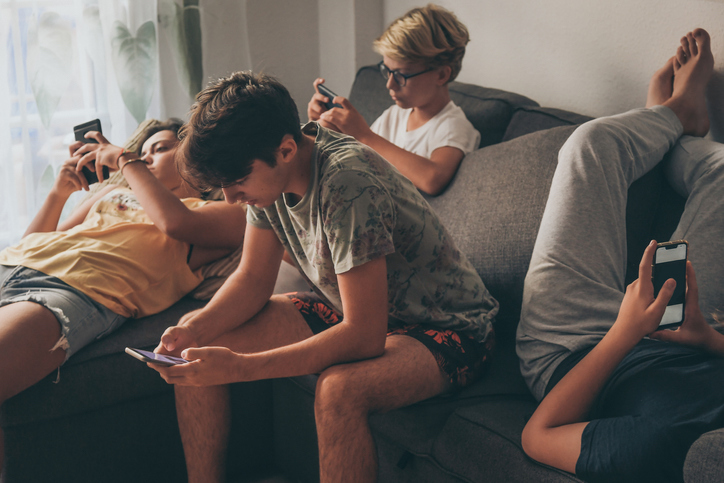 Media use in tweens and teens has grown faster since the start of the pandemic than it had over the four years prior to the pandemic.

That is a 17% increase, “a pretty substantial change,” according to Michael Robb, senior director of research at Common Sense Media.

“The amount of time creeps up each time we do a survey,” Robb said.

For teens, that is a full-on work day on screen entertainment, pointed out Victoria Rideout, lead researcher of the media use report, during a recent NPR radio interview.

“We all understood that everyone’s screen time went up during the pandemic,” Rideout said. “What was important about the survey is that we were looking at screen use before the pandemic and after the lockdowns ended,” as kids were beginning to socialize and do extracurricular activities again.

The survey looks at six months before the pandemic hit the U.S. to last fall when a lot of schools opened up again. Rideout said they found a much bigger increase than what they expected. For tweens, the screen-time increase was 50 minutes a day compared to an increase of only eight minutes increase a day pre pandemic.

With so much media use — and no real certainty on whether or how much more growth there will be — it’s important for parents, educators and caregivers to think about the content behind those numbers when they consider how to establish healthy boundaries, Robb said.

For example, take stock of what your children are watching, playing and engaging with, and what activities do they enjoy most. Kids are watching more and more online video, because they enjoy it, but while they’re also accessing social media more frequently, the survey found they’re enjoying time on social media a lot less.

It also is important to understand how your children are using media to help establish boundaries that accurately reflect the role of media in kids’ lives, said Rideout, who also is president of VJR consulting.

This reinforces the importance of media choice for families, and the need for deeper research and understanding of how this much media use impacts children’s mental, physical and emotional development, and the need to ensure social media and all digital spaces are safe and healthy spaces for kids to explore.

What we are learning is that social media is almost like a utility for kids, Robb said. They aren’t necessarily using it for enjoyment. “There is a pressure there that makes it not super enjoyable” for kids, he said.

Supreet Mann, Common Sense research manager, pointed out that a higher enjoyment factor was seen with boys because of the more interactive component found with gaming.

Teens spend nearly an hour and a half a day using social media, and about one third have conflicted feelings about the medium, the research found.

There was a substantial variation in the average amount of screen media that teens and tweens engage with each day by gender, race/ethnicity and household income with Hispanic and Black youth and children from lower-income families using screens at a higher rate.

And it is important to note that TikTok and YouTube were not considered “social media” for this survey because video-watching platforms are more often for consumption of content rather than participatory for kids.

That said, kids are united in their enjoyment of watching online videos. More than six in 10 tweens and teens saying they watch online videos every day, and say they enjoy watching “a lot,” far more than the percent who enjoy any other activity that much.

YouTube is still a favorite among tweens and teens. Among the 79% of 13- to 18-year-olds who are regular users of social media and online videos (at least once a week), 83% have used YouTube, and 68% have used TikTok.

Rideout cautioned that content often is being consumed on a small device, so it’s hard for parents to know what your children are engaging with.

“Kids are using social media at younger and younger ages,” she said. “When they’re on social media or watching online videos, parents often don’t know what their kids are doing.”

Not all screen time is bad, however.

“People see the numbers [hours of screen-time] and freak out … with an eye toward demonizing screen time entirely,” Robb said. “Just because we see a lot of time spent on screens, we don’t want to minimize the role media played during the pandemic that was positive.”

The use of devices to pass time, be creative and even use devices to learn how to cope with mental health issues, should be considered an appropriate use of screens during Covid.

“Screen use was incredibly important to young people, just as it was to all of us in helping them to make it through the pandemic,” Rideout said. “It was really important for them to stay connected to other friends; to keep their mood up, be entertained and pass the time, get inspiration and express their creativity, and protect their mental health in terms of connecting with young people.”

Research also found that teens are engaging with a lot of different types of media.

“I would expect that number to keep growing,” Robb said.

Virtual reality device use is still pretty low, he said. Roughly 17% of those surveyed live in a home that has a VR headset, and boys are more likely to have tried it than girls.

“I don’t know what the Metaverse is going to bring … but I expect those numbers to grow as well, Robb said.

Though young people consumed more media overall after the pandemic than they had before, one form of media did not increase in usage: Reading.

A healthy relationship with screens depends on the types of activities kids are doing online as well as balancing screen time with other activities like sleep, connecting with family and friends, exercise and time outdoors.