Home Articles Laundry tips from the big leagues: A baseball mom gets advice from...
ArticlesParentingMoms

Laundry tips from the big leagues: A baseball mom gets advice from a pro

In our family, we celebrate all things baseball, counting down from the time pitchers and catchers report to opening-day ceremonies.

Nothing brings out the fan in me more than watching my 9-year-old son play America’s favorite pastime. But as he and other kids across the Valley prepare to play ball, I’m stocking up on laundry detergent and stain remover.

From Little League to USSSA Baseball Tournaments, I’ve washed my share of baseball uniforms. I even paid my dues washing an entire team’s uniforms in a hotel laundry room one summer when my son traveled to a tournament in Yuma.

I learned a lot during that assignment: First, pants for 9-year-old boys all look the same, so labeling uniforms with a Sharpie is a must. Second, rinsing off mud and emptying sunflower seeds from pockets is crucial before tossing pants into the washer. Finally, the pressure to abandon using bleach (it can damage piping and emblems) on baseball pants is real.

I also learned that the washing process, although tedious, is rewarding. The sight of my son confidently taking the field in a clean uniform is priceless. But that feeling quickly fades when I find myself back in the laundry room two to four times per week during baseball season.

After one particularly tough afternoon of relentless scrubbing, I decided to seek uniform-washing help from the big leagues.

Roger Riley is the Arizona Diamondbacks’ senior director of team travel and manager of the home clubhouse. He and his staff are responsible for the team’s nutrition, equipment and uniforms.

With 30 players on the roster, along with 10 coaches and support staff, Riley estimates he washes 50-60 uniforms daily, including practice uniforms and workout clothes. Players can’t just opt for new uniforms when stains are tough or pants are torn. Riley says each player has four pairs of pants for home games, and four for the road, so uniforms get mended often.

If anyone knows the secret to getting baseball uniforms clean, it’s Riley, who has 29 years experience in Major League Baseball. While he and his team have the luxury of using commercial products and multiple washers, Riley admits his system is simple.

First off — and this is something I can use to motivate my Little Leaguer — is that each player is responsible for getting his clothes into one of many the laundry carts throughout the clubhouse. (Some days, that’s half the battle! Am I right?)

On deck is the sorting process. Like a well-oiled pitching machine, everything from the shirts and pants to the socks are labeled using heat-transfer labels that last dozens of washings.

Riley also sorts by types of stains — not by uniform color. (Wow, do I feel like a rookie!) Each stain gets a different pretreatment. Riley confirmed he does not use bleach, because it can ruin colors. Grass stains and pine tar are scrubbed with a special Amway product. Dirt of the not-so-forgiving red desert clay variety is treated with products similar to Slide Out and OxiClean.

Riley says rubber gloves are a must to save hands from harsh chemicals. Leave pretreatments on the uniform so they can work to their full potential, and then throw them in the wash, he says. Another big secret Riley shared: Don’t dry uniforms in a dryer. Hang-dry jerseys and pants, and your ball player’s uniform will be game ready.

After talking to Riley, I upped my game. My secret is using a lot of OxiClean, along with the product Zote (a laundry bar I scrub onto tough stains). After letting everything soak in a designated tub overnight, I throw it into the wash cycle — maybe even twice. Now, my son’s baseball pants go from red to white. 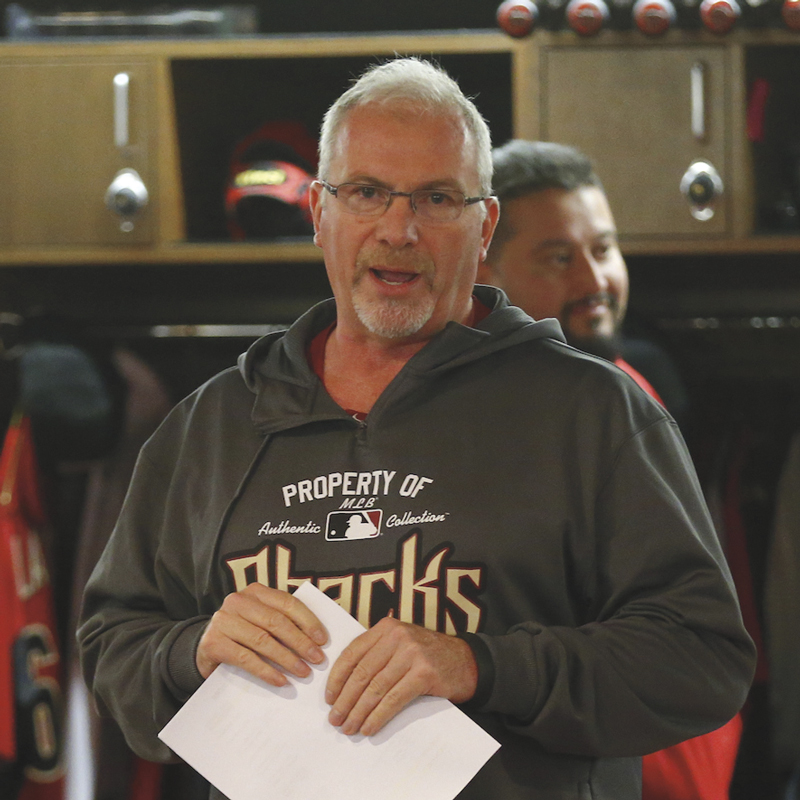 Secrets from the dugout

Because Riley sees the wear and tear on each player’s uniform, he wasn’t getting off the hook without spilling some dugout secrets. These fun facts made me realize there are some things a ballplayer will never outgrow.

Do you do your laundry at home, and if so, what products do you use? Nope, my wife won’t let me! And I won’t let her come to the clubhouse and help with the laundry here! We use Tide at home, and the Amway spray.

Which players have the dirtiest uniforms in the D-Back’s clubhouse? Catchers always win this title. Catchers are the dirtiest because of the sweat from the equipment they wear. But Goldy (Paul Goldschmidt) comes in a close second, because he gets on base a lot and always dives!

What’s the toughest stain you’ve had to remove from a player’s uniform? Red Gatorade, from Gatorade baths, is the worst! All the other flavors — lemon, orange, lime — come out easily, but not the red.